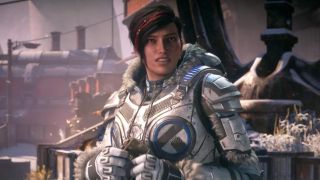 If you've been waiting to spend the money on Gears 5, you may want to jump on this deal - both the standard and Ultimate editions of Gears 5 have dropped to their lowest prices ever. The standard edition of Gears 5 is currently $25 on Amazon, which is more than half off the original $60 sticker price. Gears 5 Ultimate Edition is currently $45 on Amazon, which is nearly 45% off the $80 initial price.

Gears 5 for Xbox One | $24.99 at Amazon (save $35)
Get the standard edition of Gears 5 for 58% off the original price, the lowest the game has been since its September 5 launch.View Deal

Both editions recently dropped in price, so we're not sure how long this deal will last. The Gears 5 Ultimate Edition is loaded with goodies, and at $35 off the original $80 price tag, it's an absolute steal. The Ultimate Edition comes with the Gears 5 disc, a special character pack, 30 days of Boost, an exclusive Steelbook and a Gears 5 special sticker pack (because who doesn't want a Locust insignia on their laptop?)

Gears 5 introduced new mechanics to the familiar universe, like an upgrade system that makes the old collectible hunting mechanic feel valuable, and a skiff-riding mechanic that made traversing the (semi) open world even more entertaining. It's a great new addition a beloved franchise that manages to stay true to its roots while making necessary updates that greatly increase the quality of campaign and multiplayer gameplay.

Again, this is the lowest both editions of the game have been ever, so jump on this deal while you still can.

If you're looking for more Xbox game deals, look no further. And we're constantly updating our best Black Friday game deals so you don't have to scour the internet. You're welcome.