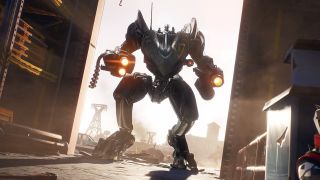 Epic have finally significantly nerfed Brute mechs after a continued backlash from the Fortnite community. The mechs, which were introduced in Fortnite Season 10, were massively overpowered leading to a lot of anger and frustration within the community. In response to the initial feedback after season 10's launch, Brutes were previously nerfed with a slight reduction to spawn rates in Arena and Tournament playlists. After continued complaints from the community, it seems Epic are paying attention and have rolled out a Brute balance adjustments update which is now live.

The latest patch reduces spawn rates across all modes, and will temporarily disable the Junk Rift in the Tournament and Arena playlists for the FNCS tournament this weekend. There has also been a sizeable decrease in the Brute’s rocket fire rate and blast damage radius. You can see the full list of adjustments below.