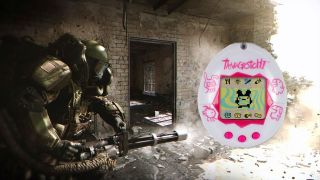 You don't need to be an avid player to know that Call of Duty's multiplayer has become more and more outlandish over recent years, from Small Soldiers-style sandbox maps in Call of Duty: WW2 to, uh, a playable chimpanzee dressed as an astronaut in Call of Duty: Black Ops 4.

The latest upcoming instalment, Infinity Ward's reboot of the Call of Duty: Modern Warfare series, promises to take the shooter series back to its purist roots, with a more grounded and relevant campaign, tactile gunplay, and multiplayer mechanics inspired by contemporary conflict than the fantastical elements of, say, Call of Duty: Infinite Warfare.

But all of that isn't to say Infinity Ward hasn't taken some... creative liberties with multiplayer customisation for this year's Call of Duty instalment, particularly when it comes to the wearable wristwatches that players can don in the game's array of PvP arenas. Speaking to The Daily Star, Art Director Joel Emslie revealed one particularly absurd example of what these wristwatches can do.

"The wristwatches we have in the game… people have really picked up on that, and they’re curious to know more about how things are going to be developed with that." explains Emslie. "We’re taking wristwatches to weird places, too. For example, we’ve got one we call the TomaGUNchi - it’s a Tamagotchi that feeds on kills. It’s a one-off we got creative with. I said to our engineers: ‘Can you make it so that whilst we’re playing and I get kills in multiplayer, it kinda lives and grows?’"

... well okay then. In totally, definitely not related or relevant news, Infinity Ward recently shot down the idea of a battle royale mode for Modern Warfare, as design director Joe Cecot (via IGN) emphasised the studio's desire to maintain "authentic and gritty, realistic weapons", explaining that "It’s really... just about pulling back to Modern Warfare and keeping that pure." Just gonna let that speak for itself.

In any case, it looks like battle royale is out, and blood-hungering Tamagotchis are in for Call of Duty: Modern Warfare, which releases on October 25 for PC, PS4, and Xbox One later this year. We recently got to go hands on with the multiplayer last month, and you can check out our impressions right here (spoilers: we're very impressed).

For more, check out the Call of Duty: Modern Warfare Gunsmith system for a look at the game's arsenal, or watch the video below for a guide to everything else out this week.