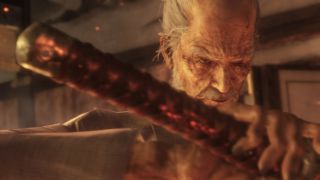 It turns out that there is a reason the Sekiro Isshin Ashina boss is so chilled out whenever you run into him. It’s because he is more than capable of cutting down nearly anyone who is foolish enough to stand against him in Sekiro. Bad news friends, because you are currently one of those people, and this fight is incredibly hard. Here is how you beat the Sekiro Isshin Ashina boss.

How to beat the Sekiro Isshin Ashina boss

Isshin Ashina has two phases and neither of them is easy. He has a thrusting attack which can be Mikiri Countered as per usual. He also uses a grab and you need to watch for his hands in this case as you’re going to need to put some distance between you both.

The timing on all of his attacks is a little slower than most enemies, but he also mixes it up a lot more than most. Keep an eye out for the Ichimonji strike that he uses. He will raise his sword above his head before bringing it down with a huge amount of force. If you dodge to the side of him you should be able to get a couple of hits in each time.

The second phase brings the heat and adds in some new attacks. Make sure you watch for one where he hunches over and begins growling, you want to rush in and Firecracker him in order to stop him from setting everything on fire. He will also stomp to produce a cone of flames in front of him which you can avoid by jumping to the side out of the path.

Other than that it is similar to the first phase and will largely be about how well you can read his attacks and punish the Ichimonji strikes. It is worth bringing Dousing Powder just in case you get set on fire as the damage will eat up your Gourd uses quickly otherwise.