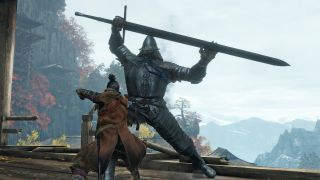 The Sekiro Armored Warrior boss is more of a gimmick than an actual fight thanks to the heavy suit of armour he wears. Rather than trying to stab the Armored Warrior in Sekiro, you will need to consistently lower his posture before kicking him into the abyss with your deathblow. The key is positioning more so than in any other fight and it is the only way to beat him.

How to kill the Sekiro Armored Warrior boss

The first thing to do in this fight is to kite the Armored Warrior into destroying the walls around the arena. This will allow you to boot him off when the time comes. His attacks will break the walls even if you parry him so just, and this is going to sound like madness, get your back to a wall and start guarding for a bit.

As posture is the only way to win this fight you are going to want to parry him an awful lot. You can also deal decent posture damage using the Axe whenever you get an opening. This makes the fight a bit more interesting than it would be if you were purely on the defensive.

You will need to keep an eye out for his sword thrust attack as instead of parrying this you need to utilise the Mikiri Counter. Assuming you can manage all of this the only other thing to keep in mind is his positioning for the deathblow. You need him to have his back to the edge in order to kick him off of it. Poor Robert.