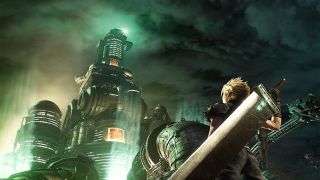 Oh no, the fear we all had has come to pass: your pre-order Final Fantasy 7 Remake will no longer be coming to you in March. The recent news has confirmed some fear and the new release date for one of the most sought after remakes of all time is now 10 April 2020. So it remains a few months away. The silver lining of this is that we'll get a more refined and polished game, the devs (hopefully) won't be as crunched as they might have been, and you've got a whole extra month to nail down your Final Fantasy 7 Remake pre-order.

Final Fantasy 7 is still set to be one of the games of 2020. As it's a remake of a classic, we now quite a lot about the game of Final Fantasy 7 itself, but dribs and drabs of new information have come out giving us a clearer idea as to how the remake is shaping up. Even though it'll have all the hallmarks of a 'modern AAA' game, and one right at home with the trends, styles and characteristic of such games, it will feature the ability to switch back to Classic, turn-based combat, that so many enjoyed 20-odd years ago and that make the series standout. And even though Square Enix are very much not trying to make a one-for-one copy, the recent trailer from the Tokyo Game Show showed us how it's building on from the original game. Away from the specifics and the details, even the boxart caused a nostalgic fuss and made us come over all funny. Having said all that, and given it's a pretty well publicised game, if you're able to go at it from a completely blind and fresh perspective, then that might just be the best way to approach your Final Fantasy 7 Remake pre-order.

Anyway, pre-orders are up for grabs right now so there's not a moment to lose. Below you'll find links to all the Final Fantasy 7 Remake pre-orders available both sides of the bond and from the usual suspects. We've even thrown in some of the relevant art books at the bottom for you to consider to go alongside the game's release or to enjoy and fill the gap between now and the release date. Thus, you have all the tools you need to make an informed decision as to which Final Fantasy 7 Remake pre-order edition you need to smash the go button on.

All the normal players in the retail game are taking Final Fantasy 7 Remake pre-orders now. And, as is often the case with tasty pre-orders, you'll get some bonuses beyond having the game on day one: you'll get in-game items, unique to Death Stranding pre-orders, too. At the very least, and with no matter what edition you pre-order, you will bag some Chocobo Chick DLC for the game if you place any pre-order of Final Fantasy VII Remake.

Generally it's a simple affair with Final Fantasy 7 Remake, as there are only two editions to go for right now. Given the enormous clamour for this game, it will be important to be aware that stock might fluctuate - particular if people want it/get it for others for Christmas or over the sales period. All the links below go to the right pages and hopefully these will be of constant and ready service for the next five or so months before release time.

The larger edition of Final Fantasy 7 Remake pre-orders available, the Deluxe Edition is the biggest way to celebrate the remake of this classic. It's widely available in the US, but it is a GAME exclusive in the UK. This is comfortably more expensive than the standard edition but considering what you get, it's a pretty swell deal. On top of the Chocobo-themed DLC that every pre-order gets, the Deluxe Edition gets you:

Pre-order Final Fantasy 7 Remake in the simplest manner with the standard edition. You'll still get the Chocobo Chick DLC for pre-ordering too, along with your shiny, hard, physical copy of the game,

While not strictly pre-orders - well, not at all - there are some little extras to be found that might really complement your Final Fantasy 7 Remake pre-order or just tide you over until the release date next year. The Sky artbooks listed below are for the slipcased edition of the book which includes all three volumes in one delectable package. If you're going to enjoy the art of Final Fantasy, why would you =only get one volume anyway? The Ultimania Archives don't come in a bundle as such but with each volume covering a handful of the first 14 games each, they are ripe for the picking and the reading before &'s remake comes out in March. (For convenience if you are just looking for one, Ultimania Archive Volume 2 is the one that covers FF7.)

Naturally, the best way to enjoy you're Final Fantasy 7 Remake pre-order is going to be with the most fully kitted-out and augmented PlayStation setup that you can manage. This means, as is the way with a lot of more recent games, you're best bet for hardware is the premium PS4 Pro, so you need to check out the best PS4 Pro deals, to get a great deal and to soak up those gorgeous visuals. To enhance this further, it's probably worth considering one of the best gaming TVs to soak up every detail of those environments too. And finally, enjoy the game's audio by catch every nuance with one of the best PS4 headsets.