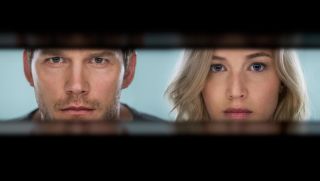 Star Wars: Rogue One is not the only film set in a galaxy far, far away this December, and it may not even be the most ambitious. That accolade arguably resides with Morten Tyldum's Passengers - a sci-fi romance starring Jennifer Lawrence and Chris Pratt - and the first poster for the film is now online.

Other than the fact that Lawrence and Pratt are very attractive people (which you probably already knew), there's not much to be gleaned from this one-sheet. With only just over four months until release it's a little surprising we've heard so little about this blockbuster, but with posters usually heralding the arrival of new trailers these days there's a good chance we'll get our first proper look at this one very soon.