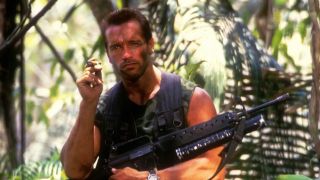 There's a new Predator movie on the way! Announced last year, we've had dribs and drabs of intel on Shane Black's sequel that have more than satiated our desire for knowledge on the sci-fi actioner. Black's already promised that the film will be "a spectacle" in the vein of a summer blockbuster, the predator itself is going to be "organically different"... but he's kept very quiet on whether Arnold Schwarzenegger will return.

Arnie himself has teased meetings with the director, and now that Black is hitting the press circuit for The Nice Guys, we're getting a little more info on the possibility of his return. I stress the word little. Chatting with Crave Online, Black confirmed that the movie will be set in modern day, and therefore if Arnie does come back he'll be older. "No, these things [the events of Predator 2] all happened in 1990, but now it’s 25 years later. So in other words, if Arnold [Schwarzenegger]’s in it - which I’m not allowed to discuss [laughs] - he would be old Arnold."

Schwarzenegger played Major Alan "Dutch" Schaefer in the original, and some 25 years on, he'd be significantly less spry than his first tussle with the yautja. Maybe he's in it for a quickie cameo?

Directed by Shane Black, The Predator is released in cinemas on March 2, 2018.