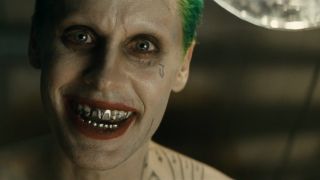 Everyone, but everyone, is excited for the release of Suicide Squad (especially after these early screening reactions). To celebrate the launch of the brand new redesigned Total Film magazine, it's giving readers the chance to bag both the POP! Vinyl classic Joker and Harley Quinn figures for free.

They're not the same as their Suicide Squad counterparts, but they're still pretty cool. All you have to do to add them to your collection is subscribe to Total Film for only £19.

Total Film has an awesome new look and lots of exciting new features it's revealing very soon, so keep your eyes peeled. There has never been a better time to subscribe! Your subscription will include:

- A Joker and a Harley Quinn POP! Vinyl.

- Brilliant value, saving you loads on the cover price.

You'll receive 13 issues during a 1 year Total Film subscription, but please note this is a UK only offer.

A hot new magazine AND Joker and Harley Quinn POP! Vinyls - what more do you want? Subscribe to Total Film now and get all this and more.