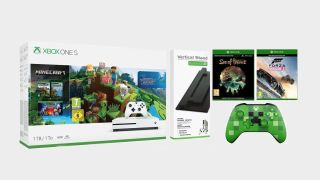 Amazon Prime Day (or should that be days, plural?) is now live for 2018, meaning anyone with an Amazon Prime subscription can now head over to the online retailer for some of the best deals this side of Black Friday. Nothing is safe from the cost-cutting, with prices slashed on the best headsets for PC gaming, best gaming TVs, and more, making it a good time to be a Prime member and gamer all at once. With regards to Xbox, Amazon currently has an offer to rival the best Xbox One bundle deals out there, and it's likely to fly off the shelves faster than a Forza supercar.

Xbox One S Minecraft Bundle for less than £200: Get a 1TB Xbox One S with Minecraft, Minecraft: Story Mode, Sea of Thieves, Forza Horizon 3, plus a vertical stand & extra controller for £199.View Deal

It includes the 1TB Xbox One S Minecraft bundle, which comes with a copy of Minecraft, the Explorers pack DLC, Season one of Minecraft: Story Mode, an official vertical stand for the console, and two Xbox One controllers, one of which is decked out in a lovely Creeper design to stay consistent with the Minecraft theme, which I'm sure you've picked up on by now.

That's not all, though. Amazon are also throwing in physical copies of Sea of Thieves, Forza Horizon 3, and free trials to both Xbox Game Pass and Xbox Live Gold, all for the amazingly affordable price of £199, down 50% from £389. Phew! Xbox bundles don't get much better than that.

Now almost five years into its cycle, the Xbox One is a well aged console with plenty of great games to its name, including a massive portfolio of Xbox 360 titles thanks to Microsoft's backwards compatible program.

That makes this deal all the more enticing for the Xbox uninitiated, especially with Crackdown 3, Assassin's Creed: Odyssey, and Red Dead Redemption 2 on the horizon. So if you're going to buy an Xbox One this week, don't pass up on this limited time offer; it's an absolute steal.

For more Amazon Prime Day 2019 game deals, follow that link to find our continually updated guide on the best bargains from this week's sale.