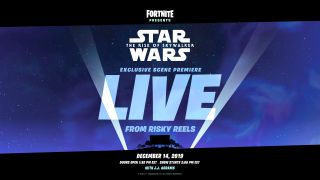 As Epic's battle royale game continues to evolve and develop, this might be the biggest crossover exclusive ever. A live Fortnite Star Wars event is going down today, Saturday, December 14, and we're going to get the premiere of an exclusive scene from the upcoming Star Wars: The Rise of Skywalker movie, revealed by none other than director J.J. Abrams himself! Fortnite will officially be the only place this exclusive scene is available, so to get a sneak peek of the latest Jedi action before anyone else you need to head on down to Risky Reels. If you want to know how to watch the Fortnite Star Wars event, when it's happening, or any other details, we've got all the information you need right here.

When is the Fortnite Star Wars event

Back in the earlier days of Chapter 1, Risky Reels used to be one of the main named locations on the island, though it's had a fair share of destructive makeovers since then. It has returned for Chapter 2, but Risky Reels is now one of the Fortnite landmarks which aren't quite so prominent. We've marked the location of Risky Reels on the map above, where it sits surrounded by trees between Pleasant Park, Salty Springs, and Frenzy Farm.

How to watch the Fortnite Star Wars event

It's likely that that Fortnite Star Wars event will work similarly to previous events such as the Marshmello in-game concert. Around the start time, players will be rifted into the sky and all weapons will be disabled, meaning minimal disruption for those who want to watch the show. Risky Reels should be highlighted with a countdown to the start of the premiere, after which we're expecting an appearance from J.J. Abrams on the drive-through cinema screen followed by that exclusive Star Wars: The Rise of Skywalker scene.

So don't be late, get your popcorn ready, and enjoy!