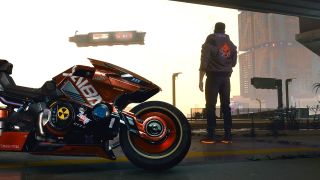 A Cyberpunk 2077 motorcycle is the inanimate-yet-still-sexy star of a new screenshot released by developer CD Projekt Red, and fans of fine animated feature films may feel like they've seen it somewhere before. The Yaiba Kusanagi has a whole lot in common with Kaneda's bike from Akira, the 1989 anime movie that helped define our modern conception of the cyberpunk genre, and CD Projekt Red really doesn't need to be subtle when its source material is this cool.

We've seen teases of the bike before, and we even got a brief glimpse of Cyberpunk 2077 protagonist V riding it through the streets of Night City at E3 2019. This is the first time we've been able to appreciate all of its crimson glory, and the image even has enough detail to appreciate all the (again, so Akira) decals. I wish one of them was a big "Canon" sticker but for licensing reasons we'll probably have to wait for mods to sort that out. By the way, both the words Yaiba and Kusanagi refer to blades in Japanese - and it is a very sharp looking bike.

I already know the Yaiba Kusanagi will be my preferred mode of transport - Kaneda's bike is boss as hell - but it sounds like players will be able to collect many more transportation options once they start playing.

"As a player you'll be able to own a garage, and in the garage you're able to store multiple motorcycles and multiple cars," lead quest designer Pawel Sasko explained in an official video. "Now all of those are actually equipped with a cool radio, and as a player you're able to drive around Night City, all those six beautiful-looking districts, and listen to different types of music. So in Cyberpunk you can play the way you want, you can look the way you want, and you can listen to the music that you'd like to listen to."

Cruising the streets sounds like a good way to burn a few hours. Once you get bored of that, you can even take your car into street races around Night City as one of the Cyberpunk 2077 minigames.

The live-action Akira adaptation is on hiatus while Taika Waititi returns for Thor 4, but stay tuned to our San Diego Comic Con 2019 schedule to see if any more big news emerges this weekend.