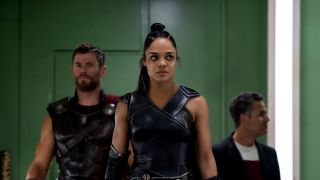 Rejoice, fellow Asgardians, because Taika Waititi will return as writer and director for Thor 4. The New Zealand filmmaker and actor was a big part of what made Thor: Ragnarok one of the best Marvel movies, bringing his mischievous humor to the comic book universe.

The Hollywood Reporter revealed the news, and added that it would mean a delay for Waititi's adaptation of the Japanese manga Akira, with the project currently on indefinite pause.

As well as directing Thor: Ragnarok, Waititi also starred as the revolutionary Kronan warrior Korg. Fingers crossed that handsome pile of rocks gets to make a comeback too.

"When they first asked me to come make this film, obviously I thought that Marvel had lost their minds and were just hiring anyone now," he told Collider back in 2017.

"No. I knew my strengths were tone, character and relationships. I had to ignore the scale of this monster. It’s a huge film. What can be distracting, on set, is if you look over your shoulder and see 300 people standing there. I just had to keep reminding myself that what’s more important is what’s inside the rectangle, which is usually two or three people trying to remember their lines."

Waititi has managed to make his mark both in the indie scene, with What We Do in the Shadows and Hunt for the Wilderpeople, and in the blockbuster world of superhero movies. He's even signed up to direct one of the episodes of the upcoming Star Wars series The Mandalorian. I don't ever want to have to see his Google Calendar, but is there nothing this man can't do?

Of course, Thor 4 will have some big questions to answer following the events of Avengers: Endgame. According to The Hollywood Reporter, Chris Hemsworth will also return to the title role, but no word yet on Tessa Thompson's kickass Valkyrie.