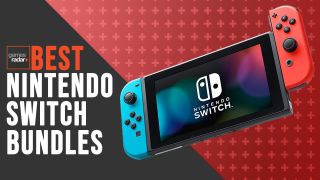 Cheap Nintendo Switch bundles are in high demand throughout the year and it can often be tricky even finding stock at some retailers. That's where we come in, our price comparison technology helps us find the best Nintendo Switch prices from thousands of retailers.

It's the bundles that make the best Nintendo Switch deals though and getting one with a discounted game, memory card or accessory can be really tough if you don't know where to look and some countries have more variety on offer than others for sure too.

You might have heard that there's more than one version of the Nintendo Switch on shelves now too. The original version has been widely replaced by a slightly improved model that has a longer-lasting battery. If you want to be sure you're getting the newer one (and you should as it doesn't cost any more) make sure the retail box has a fully red background instead of the partially white one on the older box. Also, some retailers might mention the model name somewhere, the old one is HAC-001 and the new one is HAC-001(-01). There is also the Nintendo Switch Lite which is a handheld-only version of the console, that can not be plugged into your TV - but it's a lot cheaper.

To make sure you're getting a good deal, it's important to know the base prices of the Switch consoles. In the US especially we're used to seeing some merchants jack up the prices when rivals have sold out. The Nintendo Switch MSRP is $299 and in the UK RRP is £279. That's the price for the console alone with no extras. As for the Switch Lite, the US MSRP is $199 and the UK's RRP is set at £199. So if you see prices higher than any of these, make sure you're getting something other than the console on its own too!

Nintendo Switch (Neon Blue/Red) + 64GB SD card | $314.84 Amazon
At this time of year, decent Switch bundles are incredibly hard to find - this one's quite handy though. The Switch doesn't have much on-board storage, so getting an SD card with this bundle might save you a few bucks further down the line when you need the extra space (console also available in Gray).View Deal

Nintendo Switch | $299 at Walmart
This newer version of the Switch comes with a longer-lasting battery and has generally replaced the older model nowadays. There's no money off today, but if you just want the console and don't want to get over-charged by scrupulous retailers cashing in on the console's shortages, this is the way to go. Also available in gray.
View Deal

Nintendo Switch Lite (Gray) | $189.99 at B&H Photo
This version of Nintendo Switch is handheld only, and as far as we can tell this one's ten bucks less than anywhere else.View Deal

Nintendo Switch Lite Zacian and Zamazenta Edition | $236 at Walmart
The special Pokemon edition of the Switch Lite isn't likely to stick around for long, so if you want it, now's your chance. The price has actually gone up since launch but we think the days of seeing it for $200 are long gone. View Deal

Nintendo Switch Special Edition | Animal Crossing: New Horizons (download) | £319.99 at Nintendo
Unlike in the US, UK gamers with this special edition of the console are getting a download code for the game in the box too which goes to explain why it costs a fair bit more than regular Switch prices. We expect the price to rocket up after launch though given the popularity of the game and limited edition nature of the console. Amazon is charging a tenner more at the time of writing.
View Deal

Nintendo Switch Lite | £169 at Currys
A £30 discount on the RRP is the best we've seen on Nintendo's handheld-only console. This low price is available on all three main colours of the Lite and Currys is even throwing in a Spotify Premium six-month membership for FREE.
View Deal

Nintendo Switch Lite | Zelda: Link's Awakening | £199 at Currys
Ok Currys, that's the sort of bundle we like to see. When the Lite was first released Currys had this amazing offer running but it sold out super fast. The game is still quite pricey on it's ow, so you're saving money still compared to buying the currently-discounted console on its own above. You're getting a free six-month Spotify Premium subscription here too. Also available with the Yellow or Turquoise consoles.
View Deal

Nintendo Switch Lite (Grey) + Mario Kart 8 Deluxe + 6-month Spotify Premium | £209 at Currys
This is a smaller version of the original console with Mario Kart and Spotify. Also available in Yellow and Turquoise.View Deal

Nintendo Switch Lite + Super Smash Bros. Ultimate + 6-month Spotify Premium | £209 at Currys
Considering the Switch Lite's price is usually £200, you're getting a massive discount on the game here. If you're not bothered about Smash Bros, then the console on its own is much cheaper above. There's a free six-month Spotify Premium sub with this bundle too. Also available in Grey and Yellow.
View Deal