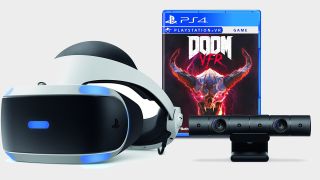 Getting one of the best PlayStation VR deals is the absolute top way to jump into the best virtual reality games that are available on pretty much any platform right now. The PC headsets may have the more powerful hardware, tech or systems but PSVR (often) has the lower price tags, and the quality games to boot, making it a very accessible package for VR gaming. By jumping into all things virtual with one of the best PlayStation VR deals, you can enjoy the cash saved by going with this system and not the others by picking up even more of those games. Win win. What's more, some of the deals we've highlighted come with some (plural not singular like other hardware systems) of those excellent games packed in, so you can dive right into the action without spending a bunch of time (and money) mucking around in the PlayStation store.

No longer is PSVR the dumping ground for tech demos and 'experiences' it was at launch. Now, getting one of the best PlayStation VR deals means opening the door a ton of fully fledged, triple-A games. For example, big hitters such as Skyrim, Resident Evil 7, Doom, and more all now have fully-realised VR versions, and PSVR is also home to some amazing exclusives like Astro Bot Rescue Mission. These are some of the best received virtual reality games of all time, and they're only available on PlayStation. Plus, PSVR is one of the easiest to set up and configure of the VR headsets, particularly the ones that require a powerful gaming PC to run.

PlayStation VR Headset and Camera + Gran Turismo Sport for $298 at Walmart
A terrific, bargain of a starter kit for those driving enthusiasts who want to race around tracks in a totally immersive driving experience.View Deal

PlayStation VR headset + Camera + Doom VFR for $315 from Amazon
A nice little package, this, and Doom VFR is one of the better shooters you can get.View Deal

PlayStation VR Starter Pack + Ace Combat 7  for £288.85 at Amazon
Just want the basic starter pack and VR Worlds to play around in? This is the best PlayStation VR deal on the essential kit you need to get started right away.View Deal

PlayStation VR Mega Pack for £264 at Amazon
If you want to start your PSVR experience with a massive bunch of excellent games, this is the deal for you. Includes Astro Bot, Doom, Skyrim, Wipeout.View Deal

Without PlayStation VR’s pièce de résistance, you’d have a very tough time enjoying virtual reality: the PlayStation VR Headset provides the direct experiential means to transport yourself to virtual worlds. It’s actually a sleek bit of technology considering its affordability, boasting a resolution of 1080 x 1200 pixels per eye. Such crisp visuals make killing zombies in Arizona Sunshine or captaining your own starship in Star Trek: Bridge Crew all the more immersive, always remaining fully adjustable to ensure a comfortable fit as you play. Prices vary from different retailers so be sure to use our collected deals to guarantee a bargain.

Without a PS4 camera, your PlayStation VR headset will have nothing to track your hand or head movements, and thus simply will not work. The good news is that you’ll already be all set should you have an original PlayStation camera. However, Sony has since released this updated, more practical PlayStation VR model complete with a built-in TV-mount. This makes it much easier to adjust the next time you fancy taking a trip into virtual reality, potentially saving you a lot of time in the long run. Trust us when we say that this camera is used for more than just saying cheese, it’s vital to the PlayStation VR experience.

While there are many PlayStation VR games that work and play perfectly fine without use of the PlayStation Move controllers, you’d really be missing out on some truly immersive experiences without them. Having two of these little bubble wand beauties allows for one-to-one hand tracking, letting you grip, punch, and throw objects to your heart’s content. Rick and Morty: Virtual Rick-ality lets you create your own scientific concoction; while firing an uzi from a speeding van in PlayStation VR Worlds makes you feel like an action star. The PlayStation Move controllers can be purchased as singles or a twin pack, but we’d highly recommend the latter to unlock their full potential.

For first person shooter fans there’s rarely anything more satisfying than looking down the sights of your gun, lining up a perfect shot, before taking down that enemy precisely and accurately. Sony’s PlayStation Aim Controller is what makes this possible in PlayStation VR. Far from the usual hunk of cheap plastic you’d expect to find in previous console generations, the PlayStation Aim Controller is a quality peripheral that feels satisfying to use and hold in the hands. Compatible games include squad-based shooter Bravo Team, Sci-Fi adventure Farpoint, and professional badass simulator Doom VFR. Once set up, there’s no better way to experience shooters in PlayStation VR.