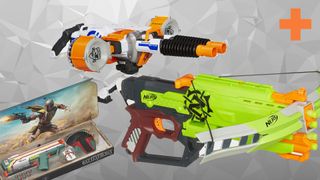 Is there ever a bad time to play with one of the best Nerf guns? The answer, obviously, is no. And the great thing about these shooters is that no one can restrict a Nerf battle to outdoors or just for summertime, as are the unwritten rules of Super Soaker. Nerf can be whipped out all year round and, with some straight-up impressive artillery unleashed onto the toy market in 2019, getting one could be the best decision you’ve ever made. Just make sure you hide the expensive china.

Gone are the days when you can merely pop to the shops to easily pick from a tiny selection of similar-looking and terribly basic guns. Now, you'll feel overwhelmed just browsing the hundreds available online, meaning you'll have to put the time in to find the right shooter for you: whether that's a pocket-sized sidearm blaster for a quick draw, one of the dozens of mid-range and more powerful war machines to see you right during a prolonged battle, or one of the top-end destroyers that requires both hands to operate or, in some cases, even a tripod stand to use.

So, to save you the hassle and inevitable frustration of trying to pick out the best of the best when it comes to finding the right piece of foam-firing equipment for you, here’s our guide to the essentials.

To ease you in gently this modestly-priced gun, the Elite Strongarm, is perfect to kick-start your blaster collection. The light, revolver-style handgun works with N-Strike or Elite Darts, as well as a wide range of other similar ammo so you’ve some choice when firing at a target of up to 90 feet away. At under £20, this is quite difficult to find and is, at the time of writing, only available on Amazon. The benefits with it are it’s quick to unpack and use but don’t be fooled into thinking it hasn’t got the power capabilities to impress.

This rapid-fire, long distance shooter is easy to load and use with its automatic firing rate and yes, in spite of its solitary Amazon review, is still a helluva gun to have in your collection. Sure, it’s big and a strain on the wallet, but what the Rival Nemesis promises is power and speed, which it has in abundance. Impressively, it’ll fire up to 100 rounds before the need to reload, which is handy if you’re in the midst of an intense battle. And despite the velocity at which it can fire out its ammo, it only uses foam pellets so won’t injury or leave a mark on impact.

If heavy-duty is a bit much, why not opt for a pocket-sized blaster? The gun sounds straight out of ‘Star Wars’ but isn’t affiliated. It’s a single-shot firearm that may not be able to suppress a plethora of incoming fire like some of the more high-powered weapons on the market but it does its job, looks good, and comes in blue, green, and orange and varies in price. The Elite Jolt Blaster serves as a last resort foam dart weapon that can come in handy and also be your lightweight, discreet, and effective sidearm of choice.

This beastly-looking weapon isn’t as visually intmidating in person. It’s smaller than it appears, which is handy for racing around and only taking up one hand, yet don’t be duped into thinking it can’t be an effective ally. A 20-dart rotation drum can fly up to 85 feet but what’s cool with this is the choice between single-fire action or a rapid-fire option to use all 20 darts with the top-mounted handle and by squeezing the trigger. Reload times may be sluggish but you’ve plenty of ammo and will have enough time with a ‘Gears of War’-style gun your enemies will fear.

For anyone old (or cool) enough to remember James Cameron’s Aliens, this monster will bring back fond, if not terrifying, memories of the 1986 flick. Complete with an over-the-shoulder strap, rotating barrel (which looks and feels devastating), and a 50-dart capacity, you’re equipped with a powerful, yet safe, heavy machine gun. What’s more, the hollow-tipped darts are usable with other Nerf weapons and works well for long-target practice or spending time at a shooting range. You will, however, need to invest in a 4D battery to power this beast of a toy.

Speaking of Star Wars, there’s one standout Nerf gun that’s straight out of a galaxy far, far away: The Rival Apollo. This is one of a number of officially licensed products affiliated with the sci-fi franchise and arguably the best-looking of them all. Anyone familiar with Disney’s The Mandalorian will pick up on its name connection and franchise fans will recognise it as something straight out of Boba Fett’s hunting arsenal. The range and speed, for its modest size, is impressive: firing at 100-feet-per-second, this battery-powered addition is the perfect inclusion for saga fans. Plus you get a Boba-inspired face mask included in the set.

Perhaps not as realistic-looking or intimidating (if you’re unfazed at being hit with an arrow) as other entries, this compact crossbow but has plenty going for it. Not only can you strut around like a season 10 survivor in ‘The Walking Dead’, but the pull-back-and-fire mechanism is a refreshing change to using an automatic gun. It’s still a powerful bow and while it may only come with four darts, stockpiling them is easy because they’re relatively inexpensive to buy. The good thing is that it’s suitable for kids and grown-ups, just don’t shoot at point blank range for obvious reasons.

Just to make everything else pale in comparison, go all-out with what can only be described as a gun with legs (but detachable ones), otherwise known as the Elite Rhino Fire-Blaster. Yes, no longer is foam-bullet warfare a quick-moving test of skill and agility, but now about how best to obliterate your enemy (aka, your gran) with a gun on a tripod from a stationary position. With a 25-shots-per-barrel capacity (and up to 50 rounds in a rapid firestorm), it may be pricey but is sturdy, easy to reload, and a lot of fun.