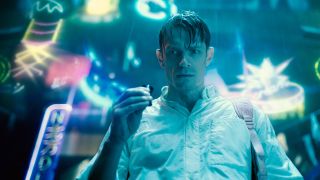 Altered Carbon season 2 finally has a release date. The Netflix original series will debut on the streaming service on February 27th.

The official twitter account for the series unveiled the news, along with a minor teaser trailer. While it contains no new footage from the show, it does feature a very cool graphic – what's seemingly a revamp of the opening credits – and the message: "Your re-sleeving is now complete."

Back in 2018, we learned that the first season's lead, Joel Kinnaman, was being replaced by Anthony Mackie – the actor best known for playing the superhero Falcon in the Marvel Cinematic Universe. Mackie will likewise play Takeshi Kovacs, who has also bee portrayed by both Kinnaman and Will Yun Lee in the series.

How come multiple actors play the same character? Well, Altered Carbon takes place in a world where people can transfer their consciousness and memories between bodies – or "sleeves" – allowing for unlimited recasting.

Altered Carbon season 1 won relatively positive reviews, with GamesRadar+ calling the series, "A vibrant, well-made sci-fi story with a strong mystery at its heart," adding: "Occasional mid-season lulls and weaker backstories deny Altered Carbon true brilliance, though." The series is based on Richard K. Morgan's book of the same name.

For more Netflix goodness, check out our rankings of the best shows on Netflix right now.