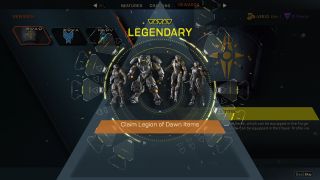 In order to unlock these items play through the game’s opening missions until you’re returned to Fort Tarsis. Once you’re given free roam of the place head straight for the shops near your Javelin and speak to Prospero. You’ll find him on the right hand side staffing the vanity store. He’ll give you a short spiel about how all Javelin deserve to look bad-ass and will then ask you to go out into Bastion and collect 3 Ember pieces in a mission called ‘Lighting a Fire’. The fastest way to this is by visiting abandoned camps in Freeplay so jump in and head for any structures you can see in the surrounding area. Once there, search all the chests and organic plants you can see and Ember will occasionally drop out of them along with the material you were harvesting. You can also get Ember from world event chests so if you come across one join in and you might get lucky at the end.

Once you have all three pieces of Ember exit free play, return to Fort Tarsis and speak to Prospero again. This will unlock the store and crafting but what we’re interested in is the rewards tab. Move over to it and you’ll see your rewards waiting for you (including any from the VIP weekend). The Anthem Legion of Dawn pre-order bonus items are Legendary pieces of equipment you’ll need to equip to your Javelin in the Forge. You should have a power 18 Legendary Marksman Rifle called Light of the Legion and a Legion of Dawn Helmet, Torso, Arms and Legs as well as a set of graphics. You'll get a set of armour for all four of the Javelin types, and the graphics can be applied to all too. Plus, all the armour bits can be painted in whatever style you choose.

The Marksman Rifle is hugely overpowered compared to the level of enemies you’ll be up against in the early stages of the game so make the most of it while it’s effective but be prepared to swap it out once better, higher level, loot starts dropping in the later stages.

And that’s it. You now have the Legion of Dawn items which can be equipped or swapped out whenever you feel like it.

James is GamesRadar's Senior Producer. Lover of dogs, pirates, and pirate dogs. James once dressed up as a giant bunny and ran blindfolded around some woods. For fun. He's also responsible for stitching together a lot of the videos you see on this every site. Those two things are unrelated.
See comments