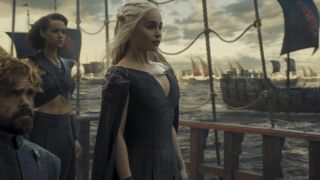 Game of Thrones' season six finale has already been dubbed by many as one of the series' finest hours, but one fan (via Imgur) has spotted several similarities to a previous Game of Thrones episode - the season one finale.

Other similarities are less obvious, like the fact that Grand Maester Pycelle has sex with a prostitute in both episodes...

...or that Daenerys bids farewell to her lovers - Khal Drogo in season 1 and Daario in season 6 - albeit in very different ways.

Season finales work out really well for Tyrion Lannister. In addition to the memorable season four finale in which Peter Dinklage's dwarf kills Tywin, the final episodes of season 1 and season 6 have him proclaimed Hand.

Finally, Game of Thrones loves to end its seasons with a big Daenerys moment. While the last episode of season 1 saw the birth of her three new dragons, the season 6 closer had the fully grown beasts soaring to Westeros with Dany's fleet.