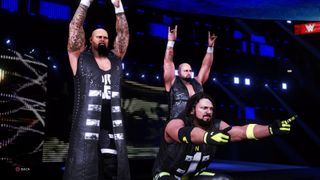 Entrance themes using WWE 2K20 custom music are one of the most-wanted elements of the long-standing grap series - but sadly, licensing restrictions have prevented it arriving on this generation of consoles. No matter, for those of you still playing WWE 2K20 despite its flaws: GR has come up with the almost-perfect alternative. Below you’ll find suitable alternate themes for a host of CAWs, in addition to appropriate replacements for in-game characters: such as heel Bayley. Ring the bell for your WWE 2K20 custom music guide.

How to change in-game custom music

Before we start, a quick how-to. In order to edit any character’s music according to the list below, boot up the game and then select ‘Creations’. Now choose ‘Entrance’, then ‘Superstar’. This brings up a list of all in-game wrestlers, which can be sorted by four categories: ‘All’, ‘Champions’, ‘Custom Superstars’ (home to your CAWs) and ‘Downloaded Superstars’ (home to any WWE 2K20 DLC you own). Select the wrestler you’d like to edit, then choose ‘Easy Creation’.

After a brief loading screen you’re presented with the wrestler’s current entrance. Jump down five steps to ‘Entrance Music’, and select this option. You can now choose the replacement theme from an extensive list.

You’re not quite finished yet. To ensure the correct custom music plays when you win a match, jump back out to ‘Creations’ and select ‘Victory’. Again, choose the wrestler you want, then ‘Custom Victory’. Once his or her victory scene has loaded, scroll down to ‘Victory Music’ and choose the option called ‘Entrance Music’. This ensures all cut-scenes match up.

Right, now you’re ready to go. Let’s get into the themes themselves…

Disappointingly, WWE 2K20 utilises Hardy’s old school Team Extreme theme and gimmick by default, despite the popularity of his ‘Woken’ character. No matter: we can fix this, and surprisingly easily. Follow all the steps we went through above, and once you’re in Create-An-Entrance change ‘Motion’ from Matt Hardy 2 to Matt Hardy 1. Now, for his music choose Modern 2. It has a slow-building, twinkly intro and then bursts into gothic melancholy, just like his Woken theme.

The long-time fan favourite turned heel after winning the Smackdown Women’s Championship for a second time in October, in the process chopping off her hair and decimating the inflatable tube-men which had been a fixture of her ring entrance. Ouch. A new theme immediately debuted, completely different from the super-happy one found in WWE 2K20. The closest fit in-game is Mojo Rawley, while King Of The Cruisers 1 is worth a look if you wish to replace her entrance motion. [Credit to MJMC27 and YummyNoodlezz on Reddit for these spots.]

As explained in our WWE 2K20 Lio Rush story, the former cruiserweight champion is missing from this year’s game after a surreal set of events which unfolded last summer. Sadly, that also means you’re denied his excellent, toe-tapping theme. No matter: grab yourself a fan-created Rush from the Community Creations servers – there’s a great one in GR’s WWE 2K20 CAWs guide – then apply the Legend 3 theme and you’re good to go.

You won’t be able to view the forums without having an account, but caws.ws is a fantastic resource when it comes to WWE 2K20 creations of all types. It’s there that I unearthed an excellent replacement for his in-game theme, which was quietly ditched in September: Papa Shango. It’s slow, haunting and an uneasy listen, with some resemblance to his new WWE music. Thanks to CAWs poster Lower Midcard for the tip-off.

Former Shield member Ambrose shockingly left WWE in 2019, despite the fact that he’s married to backstage host Renee Young - he’s since become one of the key members of the AEW roster. Now known as Jon Moxley, you can re-add him to your game as a CAW and then use Roman Reigns’ music if you wish to re-create those Shield years. As for his solo WWE theme, 80s 2 will see you right.

Like Bayley, the Japanese import surprised everyone with a nefarious character change in 2019 - not least developer Visual Concepts, as it happened too late to change her dance-tastic in-game theme tune. Instead, I recommend Neon 1, which has a similar beat to Shirai’s current theme, with some evil-sounding guitar flourishes.

The man who launched AEW won’t be back in Vince McMahon’s federation any time soon - hence being one of the biggest names in our 15 wrestlers you’ll never see again in a WWE game feature. But like Rush and Ambrose, you can find excellent fan-created versions in Community Creations, and you have two strong theme options: Cubes 1 if you want to emulate his AEW music, or Dusty Rhodes should you want to honour his late, legendary father.

After nigh-on a decade away from WWE, the former Johnny Nitro returned in December - and is certain to be one of the most anticipated inclusions on the WWE 2K21 roster. If you can’t wait until then, the best fan created version I’ve found is by XXRogueShounenxX. Go grab it from the Community Creations servers, then adjust his theme music to Hardcore 2 using the steps outlined earlier.

The trio of AJ Styles, Luke Gallows and Luke Anderson debuted a grunge-heavy new theme in September 2019. To edit this one you need to go to ‘Creations’, then ‘Entrance’, then ‘Team’. Choose ‘Tag’, then change the entrance music to Bodybuilder. It’s not quite as loud as their real tune, but still just about fits. Now back out and do the same for their ‘Trio’ entrance. And for your final trick, try giving them a few more wins in Universe mode than they’re ever allowed on Raw…

WWE 2K20 is out now. To find out how it’s playing now following after a disastrous start, leap on over to our WWE 2K20 patch notes.