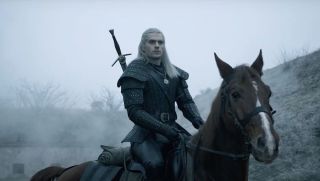 The Witcher Netflix series took San Diego Comic-Con by storm on Friday. Henry Cavill, who plays the character Geralt, was there, as were multiple other members of the cast and crew behind the show. Gamesradar's sister publication SFX were on the scene to bring you everything that happened at the panel.

Just when we thought they weren't going to release any footage to the general public, Netflix went ahead and dropped the entire Witcher Netflix series trailer onto the internet.

Our college at SFX did an excellent job of summarising the clip up in one succinct message: "Fights, monsters, sex... a giant spider that rises from water while Geralt's eyes have turned black..." Watch the trailer above.

There was, indeed, some footage from the series shown exclusively to the audience at San Diego Comic-Con. One clip sees Geralt fighting multiple enemies with his sword in a castle's throne room. He crosses swords with Queen Calanthe, who yells stop.

"I spent all of my free time with a sword in my hand," Cavill said. "Just getting used to it. I had three swords where I lived and four at work."

There were also scenes on a beach with Anya Chalotra as Yennefer talking to a baby girl, apologising she hasn't had much of a life. "We're still just vessels for them to take and take until we're empty and alone... so count yourself lucky - you've cheated the game and won without even knowing it" she tells her. "Sleep well."

Yennefer apparently goes through a physical transformation on the show, with Chalotra saying of the scene: "This scene is such a huge moment in her journey. It was epic. It was freezing, but it was epic!"

Another scene: Freya Allan's Ciri walks through the snow covered woods and discovers a bright light, a noise rising. She finds herself surrounded by women with spears. "Please don't hurt me, I'm lost," she says. "I don't know how I got here..."

Taking from the books

Showrunner Lauren S. Hissrich was forthcoming about wanting to adapt the book series, saying she immediately fell in love with the short stories. However, she initially told Netflix that she was not the right person to adapt them, but was eventually persuaded otherwise.

But what's a Witcher?

Cavill took time to explain what exactly a Witcher is, telling the SDCC audience: "They travel the world hunting monsters for coin. They're ultimately just a group of badasses who kill monsters." He added: I've played the games a lot. Many many hours. And Warcraft! He's not your average hero. He won't treat everyone perfectly. Deep down he's a real hero."

Cavill also revealed that he fought off over 200 other actors to get the role of Geralt. "I called my agent every day, I was really annoying," Cavill said. "It's an absolute honour to bring this role to the screen."

We previously saw pictures of Geralt's horse, Roach. Turns out, that's just one of many Roaches. When the series starts, Geralt is over 100 years old and has gone through a few steeds. However, the one in the series is special, and Geralt feels emotionally attached to the animal.

"Roach is more than just a horse," Cavill says. "She's more like an anchor to Geralt's true and honest self."

Speaking about her character Ciri, Freya Allan said the character has had a sheltered upbringing and is very privileged. She added that, in the books, we very much see Ciri through Geralt's perspective, and she wanted to see the character not through his lens.

"You get to see so many things in flashbacks, and we have brought those things to life, and I think that's my favourite part of the series," she said. "We were able to give the characters a bit more breathing room so you can get to know them before they meet up."

For more clips from SDCC, head over to our SDCC 2019 trailers hub, and take a look at the San Diego Comic Con 2019 schedule - so you know exactly what to expect in the days ahead.