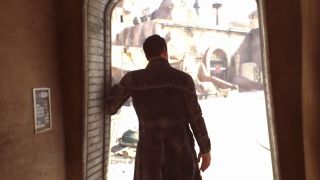 How would you feel about a Star Wars game set within the span of the original trilogy that isn't Shadows of the Empire? According to a rumor shared by reliable fansite MakingStarWars.net, that's the direction EA is taking for Visceral's Star Wars game, and it will explore life in the criminal underworld between A New Hope and The Empire Strikes Back. Potential minor spoilers follow, but nothing you probably wouldn't find out beyond the first hour or two of the game.

The report claims that the still-untitled project will star an Imperial draft dodger from Alderaan with the appropriate nickname of "Dodger" - played by Gotham actor Todd Stashwick, who also has a writing credit on the game. Sounds like he's pretty much the polar opposite of Iden Versio, the born-and-bred Imperial special ops soldier who leads Star Wars Battlefront 2's single-player campaign.

Shirking his duty to the Galactic Empire has landed Dodger on a wanted list and compelled him to flee to the Outer Rim where the Empire's grip is a bit weaker. He gets pretty good at this whole "wanted criminal" thing out there - learning to talk fast and shoot straight (according to the rumor, he also wields a weird stun stick/whip thing which he can use to grapple enemies) - which is good, because he's extra wanted after the destruction of Alderaan.

Part of the game's story will allegedly deal with Dodger amassing enough credits to grease the right Imperial palms and pay his way off the Alderaan "survivors list". His collection of employers will even include Jabba the Hutt. Nothing is ever that simple of course, and Dodger will discover something in the process that will thrust him into the middle of the galactic conflict he's been working so hard to stay the hell away from.

Sounds like just the kind of freewheeling underworld saga that fans have been hoping for since Star Wars 1313 met a quiet end. EA is keeping the spotlight on Star Wars Battlefront 2 this year, but once DICE's multiplayer battle game comes out in November we'll hopefully hear more about Visceral's project.

What do you think of this direction for a new Star Wars story? Keep in mind it's being led by Amy Hennig, who was formerly creative director of the Uncharted series.

Can't stand the wait to start a Star War of your own? Read our list of the 10 best Star Wars games of all time, or how to turn your favorite games into tabletop RPGs.