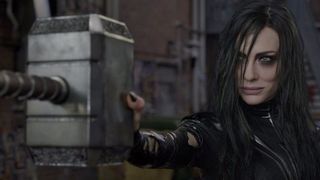 Hela (as devilishly played by Cate Blanchett) is already making quite the name for herself in the MCU. The Thor: Ragnarok trailer has shown the Goddess of Death destroying Mjolnir, levelling Asgard (and NYC) and just generally going round being all evil. She could soon be upping her destruction on an even grander scale though in Avengers: Infinity War if a fan theory is to be believed.

Many are speculating – as reported by ComicBook.com – that Hela isn’t just the Asgardian Goddess of Death but Death herself. If you haven’t brushed up on your comic lore or simply don’t know your Avengers from your Asgardians then, worry not, here’s a primer:

Death, in Marvel continuity, is the literal embodiment of death and, naturally, someone who Thanos lusts over. The purple tyrant even brings death and destruction everywhere he goes just to impress her, despite her constant rejections. Death is even Thanos’ mistress on occassion. Yeah, comics are weeeeird.

@MindOverMuses The Unworthy Thor comic line does have Hela in Mistress Death's place as his lover. What a lovely combinationApril 12, 2017

Seems like Marvel's going to replace Lady Death with Hela. But we'll never know. On top of that, Stephen Strange's going to be in the movie.April 11, 2017

It stands to reason that Thanos will want to impress Death in the MCU too. Introducing Hela as Death in Thor: Ragnarok instead of a brand new character halfway through Avengers: Infinity War is probably the best way to go about it. Plus, it’ll drag Thor into the mix without needing a convoluted reason to bring him back.

Thanos, though, needs to take Dating 101. Less planet-destroying, more flowers and chocolates. Keep the gauntlet though, the ladies love a gauntlet.