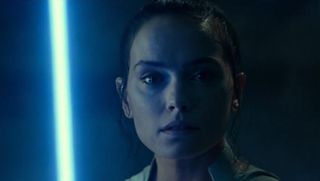 The holiday season and Star Wars season have merged into one epic time period of announcements, premieres, and Baby Yodas, and the gifts just keep on coming. According to The Hollywood Reporter, Lucasfilm president Kathleen Kennedy has a director lined-up for the untitled and unknown Star Wars movie due out in 2022.

The story is quick to clarify that this 2022 film is "not the one being developed by Star Wars: The Last Jedi filmmaker Rian Johnson. Johnson is allegedly still in talks to develop his own Star Wars trilogy that is entirely separate from the original saga, which is now considered movies one through nine. This 2022 film slot was initially meant for Game of Thrones' David Weiss and David Benioff's first film, but as GamesRadar+ reported back in October, the duo parted ways with Lucasfilm to focus on other projects.

We won't be getting an announcement regarding this mystery film with its mystery director until January. This is probably so any announcements about the franchise's future won't compete with the slew of Star Wars stuff we still get to enjoy before the decade is over: Star Wars: The Mandalorian and Star Wars: The Rise of Skywalker.

As far as who the director could be, we reported in September that Marvel's Kevin Feige had met with Kennedy to discuss a future project. Feige has a pretty loaded schedule, however, with a bunch of Disney Plus shows in the pipeline, Spider-Man back in the picture, and Marvel Phase Four on the horizon. Maybe Feige is a master juggler and can balance both franchises with ease…

Speaking of lined up, we've got a ton of great Black Friday game deals lined up for you, and we won't make you wait for any announcements.