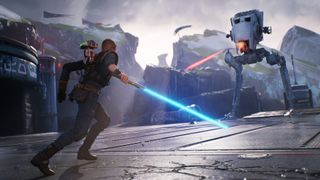 The look of lightsabers in Star Wars Jedi: Fallen Order have been changed after fans noticed they didn't look quite right. Star Wars connoisseurs picked up on the fact that the centre of the Jedi/Sith weapon didn't shine the bright white it typically does in the movies, so Respawn got on it and made some tweaks, so now the lightsaber will be brighter and stabbier when it appears on our screens on November 15. Hey, it might sound like a small thing, but it looks like it's going to end up making a big difference.

The news came out during an episode of the Game Informer Show podcast, with game director Stig Asmussen mentioning how fans had pointed out the lightsabers didn't quite look as they remembered them. "We made a mistake on that one, and since then have fixed it," says Asmussen. "That was fair feedback and criticism. We've tweaked [the lightsaber], and also tweaked the shape of the lightsaber blade a little. You can see the difference right away." Presumably, when the game comes out later this year the trademark weapon will be brighter in the centre, emitting a whiter light with colour only palpable around the edges.

Hopefully, fighting with lightsabers – regardless of what they look like – will make fans' dreams come true, as there are certainly high hopes for Jedi: Fallen Order. No pressure, Cal Kestis. If you're after more information about the game, here's everything you need to know about the Star Wars Jedi: Fallen Order story, or look below to watch our preview of the game from E3 2019!