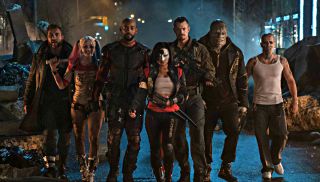 We've known for a while that Ben Affleck's Batman will have an extended cameo in Suicide Squad, but now it looks like the Dark Knight won't be the only Justice League member who'll be showing up in the movie. According to the cast list (via i09), Ezra Miller's Flash will also be making an appearance.

If that cast list is in order of appearance, then Miller's presence makes a lot of sense; Captain Boomerang is one of The Flash's premier villains, so it's likely that we'll get a glimpse of the encounter that resulted in Boomerang ending up in Belle Reve.

I was a little underwhelmed by the little we saw of Barry Allen in Batman v Superman, but Miller's take on the Scarlet Speedster was one of the highlights of the Justice League trailer. Given that that movie is still over a year away, it's great that we're going to be seeing a little more of The Flash sooner than expected.