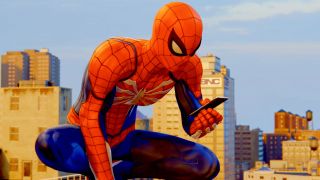 The delightful Spider-Man PS4 was released on September 7, 2018, so you'd think players would've worked out all the Spider-Man PS4 Easter eggs by now. But according to Elan Ruskin, a senior programmer at developer Insomniac Games, players never noticed (at least) one Easter egg in the game's Big Apple: a certain group of civilians totally vanish from the game on Saturdays.

Ruskin shared the Easter egg on Twitter over - fittingly enough - the Easter weekend. As Ruskin explained, the Jewish citizens in Spider-Man PS4 don't appear on Saturdays. For the unfamiliar: Saturday is reserved as a day of rest known as Shabbat or the Sabbath in Judaism. During the Sabbath, many practicing Jews will take time off work and stay home for the day - meaning they wouldn't be seen on the streets of New York posing with Spidey.

It's a neat little detail, and you'd better believe I'm going to scour the game's city this Saturday to see it for myself, but I think the most exciting thing about this Easter egg is that it hadn't been found until now - or at the very least, it hadn't become public knowledge. It makes you wonder what else may have gone unnoticed, and it's yet more evidence of how detailed the game's city really is.