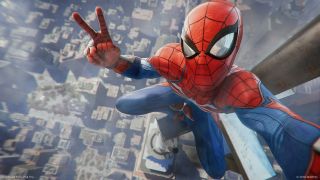 Spider-Man: Far From Home is finally out in cinemas, closing the books on Phase 3 in the Marvel Cinematic Universe following the events of Avengers: Endgame. Naturally, MCU fans are already gushing over the implications of the Spider-Man: Far From Home ending, and what it means for the franchise's future, but anyone who's played last year's Spider-Man PS4 game from Insomniac will probably be talking about one thing and one thing only.

Spider-Man: Far From Home post-credits scene explained – What it means for the future of the MCU

With very minor spoilers for the events of the Spider-Man: Homecoming sequel itself, the latest new Marvel movie pays homage to its video game contemporary in a big way, as we witness Tom Holland's webhead taking a selfie while swinging through the streets of New York, striking the exact same pose as that found in Spider-Man PS4 via the in-game photo mode.

It's a small, subtle, but unmistakable nod to Insomniac's open world gem, and the studio itself has been gushing with pride all over Twitter ever since it booked out a theatre to go and watch the movie en masse. Check out an image of the team below from Spider-Man PS4's Animation Lead Mike Yosh.

According to Insomniac writer Mary Kenney, the team burst into applause when Far From Home referenced their labour of love, which itself has also crossed over with the movie via two new in-game costumes for players to flaunt around New York City at no extra charge.

You can check out those Spider-Man PS4 Spider-Man Far From Home suits in more detail here, but - for those more interested in the movie itself - fans have also discovered a Spider-Man: Far From Home Fantastic Four Easter egg which may be outlining the near future of the MCU in a big way. It's a big year for the friendly neighbourhood webslinger, to say the least.

Far From Home is one of several awesome things in entertainment out this week, check out our Release Radar below for a guide to everything else to play and watch right now.