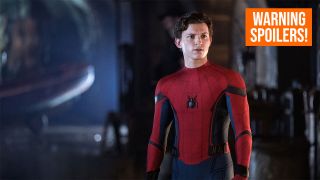 Spider-Man: Far From Home isn’t your typical superhero movie. When it comes to Spidey’s second MCU outing, things aren’t wrapped into a neat little package so the audience can go home happy. Far from it. We were left with a lot more questions than answers. That’s why the Spider-Man: Far From Home ending has already become one of the most-talked about MCU moments, and why there’s plenty of people going back to re-watch the movie over the weekend – and beyond.

So, where to begin with the fallout from the Spider-Man: Far From Home ending? We’ve got a dozen questions waiting for you down below, ones that hopefully mirror your own experiences. There’s plenty to talk about: Mysterio’s fate, the Spider-Man: Far From Home post-credits scenes, and even Peter Parker’s love life. It’s all worth exploring – and they might unlock the secrets of Marvel Phase 4 in the process. Spoilers follow...

And maybe watch our Spider-Man: Far From Home video review too!

Ok… have they gone? Good. Here are the 12 biggest questions we have after watching Spider-Man: Far From Home.

All of the pre-marketing material made damn sure we all knew that Mysterio (supposedly) was from another Earth entirely. As explained in the movie itself, Beck actually took advantage of the confusion surrounding the Blip and came up with some multiverse mumbo-jumbo to explain away his ‘powers.’ This, when coupled with Nick Fury buying the idea easily because he was secretly Talos (more on that in a moment) means it’s just about plausible.

But we wanted the multiverse, damnit! Marvel can’t set it up and take it away from us like that, surely? Looking at it from a more hopeful perspective, Far From Home may be ground zero for the whole multiverse idea. It’s planting the seed in our head and, like Beck’s trickery, is making the idea seem plausible to the movie-going audience. So, when it actually does happen, it doesn’t seem too far-fetched. It’s the cleanest, most logical way to introduce the X-Men and Fantastic Four without over-stretching the confines of the MCU, after all.

Nick Fury and Maria Hill are replaced by Skrulls (specifically Talos and his wife) during the events of Spider-Man: Far From Home. That much we know. However, it now opens up the idea that anyone could be a shape-shifting alien. Brad sure seems suspiciously ripped, and Happy is distracted for much of the movie (although, counter-point: He was probably too busy looking at Aunt May in mom jeans). The Skrulls could be anywhere, which is pretty freaky.

Secret Invasion, or at least a version of it, could just be a handful of movies away if Marvel keeps up with these swap-out shenanigans. Right now, we should be asking who isn’t a Skrull. Although they’re not as dangerous as in the comics – it will keep us guessing all the way into Marvel Phase 4. Talos, too, will almost certainly be making a comeback.

The logic behind the illusion tech was… kinda iffy (think about it: anyone could walk into it at any time and spoil the whole thing), but it’s an intriguing concept that Mysterio barely scratched the surface of. Even more interesting is the fact that the Beck-created BARF seems weirdly MIA by Far From Home’s end.

Nick Fury appears to make use of it in one of the Spider-Man: Far From Home post-credit scenes (and Peter Parker sent the drones holding the tech away in London), but there’s bound to be more BARF gear out there. Mysterio must have back-ups. A man with as many master plans as he has doesn’t shuffle off this mortal coil without an ace in the hole. Don’t be surprised to see BARF get another run out against Spidey after seeing how much it affected him, and us, in Far From Home. Three words: Zombie Iron Man.

4. What’s next for Spider-Man?

Spider-Man is in a lot of trouble after Far From Home. Not only is he probably on the run from the law, but everyone knows who he is. Having your secret identity released to the world *and* being wanted from murder probably has Spidey wishing Thanos would turn him to dust again right about now.

It’s hard to see a third movie doing anything other than having Peter Parker clearing his name. Until then – which could be 2021 if we’re going by the time it takes Sony to pump out each Spider-Man movie – there’s a very good chance that Spider-Man could go underground. Don’t expect him to crop up in any other Phase 4 movies, that’s for sure.

5. Did anyone catch the disgruntled Stark Industries employees?

In one of the film’s more surprising twists, the supporting cast that help propel Quentin Beck towards supervillainy are none other than a group of downtrodden ex-workers at Stark Industries. Some even had bit-parts in other MCU movies, such as the bespectacled William who was at the wrong end of a particularly explosive verbal volley from Obadiah Stane in the first Iron Man.

But where are they now? William presumably sends out the incriminating video of Spidey, having last been seen downloading it to a USB. That’s it. Now, they’re in the wind. No repercussions, no arrests. Nothing.

So, there’s a bunch of angry people who feel wronged by Stark (including the Vulture, don’t forget) waiting out there for their chance to take a dig at the next best thing in Spider-Man. Semi-related: There’s also vacuum in New York City for a wealthy individual to step in, take that anger, and channel it into something more… productive. Step forward, Norman Osborn?

Will they? Won’t they? Happy and Aunt May’s on again/off again romance is played up for laughs in Far From Home, though it’d be nice to see the pair get together for realsies when all is said and done.

May has brushed it off as just a summer fling with Tony Stark’s former lapdog-turned-head-of-security, yet the puppy eyes Happy tend to flash whenever May is about suggests otherwise. Love very rarely lasts in the MCU – fingers crossed this one is for keeps.

7. Why’s Nick Fury in space and who is he working for?

Hidden behind the big Talos revelation is the fact that Fury is currently in space, or at least on some sort of spaceship. It could very well be tied into Captain Marvel, given the fact that the Skrulls are flanking him in the final scene, though Fury is definitely the type to keep things close to his chest and make everything classified on a need-to-know basis. Watch this space.

However, there’s also the small matter of the fallout from S.H.I.E.L.D still being keenly felt. The comics eventually brought in S.W.O.R.D to deal with intergalactic matters. Could Fury be laying the foundation for his own new agency?

8. Will we hear more about The Blip?

The Snap is no more. As Betty Brant’s hilarious opening news report will attest, the common name for Thanos dusting half the universe (and everyone being brought back in Avengers: Endgame) is now The Blip. But there are complications to wrap your head around. People have grown up in the interim. Some people now younger brothers who are now older than them. Then there are other things to consider: Are people old enough to drink despite five years having passed without them existing? What about those who have lost family, friends, and workers and then they have to deal with a sudden return? How’s everyone coping? It’s all very confusing, and something that the MCU might want to explore some more. Then again, it might be worth just hand-waving it all away, given the minor details could get far too complex for what is typically straightforward comic book fare.

Say it ain’t so. Quentin Beck dies in Spider-Man: Far From Home – at least, we think so. EDITH confirms as much to Peter during the final act, yet there’s the small matter of Mysterio having had ample time with Stark’s billion-dollar plaything. He could very well have made it look like he was dead, or have some sort of hyper-realistic illusion tech he was working on.

All signs were pointing towards a Sinister Six making Spidey’s life a living hell. Vulture and Scorpion are in cahoots in jail, while Mysterio would have got us halfway there. Maybe those plans have been shelved, but it’d be a shame to say goodbye to Mysterio and Jake Gyllenhaal after such a great performance.

10. Where are all the Avengers at?

Most of the old guard are either dead (Iron Man and Black Widow) or too busy collecting their pension (Cap), yet Earth’s Mightiest Heroes still have a considerable presence post-Endgame. But the elastic band of believability will only stretch so far when it comes to making excuses for why the Avengers haven’t arrived on the scene during a major attack in a world capital.

Sure, Talos-Fury wouldn’t have had any way to contact the likes of Falcon or Captain Marvel anyway. It’s just something that highlights the real weakness when it comes to the grand patchwork that is the MCU. If everything is connected, why doesn’t everyone show up all the time? Endgame’s culling of the herd will have helped matters a little, though even Spider-Man asks the question early on about why the others aren’t around. I don’t know, Spidey. I just don’t know.

Pretty please? JK Simmons is probably the best-cast actor in any superhero movie ever. He is J. Jonah Jameson. He’s also been a sorely-missed presence in many a Spider-Man movie over the years and his post-credits appearance was a high-point. The audience went bananas for him. Let’s hope Sony (and Marvel) is chucking sacks of cash at him as we speak so he can sign on for a Spidey threequel ASAP.

12. Was that the best post-credits scene ever?

Where does that rank in terms of after-credit stingers? We’ve got a mini Skrull invasion-of-sorts, Peter Parker’s identity is now out in the open, and there’s potentially a set-up for whatever Nick Fury is doing in outer space. So much was achieved in such a short space of time – and it even includes the fan service in the shape of JK Simmons’ belated return. It could be up there with the very best and most crowd-pleasing. In terms of importance, it could only be bettered by the likes of the Avengers Initiative debut in Iron Man and Thanos going hunting for the Infinity Stones at the end of Avengers: Age of Ultron. It was that good.