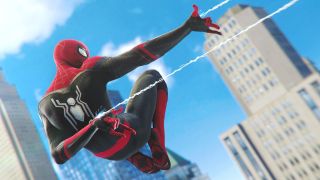 A pair of suits from Spider-Man: Far From Home are now playable in Spider-Man PS4 with the latest update for Insomniac Games' open-world web-slinger. The two suits let the game's iteration of Peter Parker cosplay as the Marvel Cinematic Universe's iteration of Peter Parker in his new-and-improved Upgraded Suit and his extra-sneaky Stealth Suit. All you need to do to get the suits is download Patch 1.16 for the game, though you must have played far enough in the story to get the Advanced Suit to use them. Don't worry if you're just getting started, it's quite early.\

The Upgraded Suit drops the usual red-and-blue color scheme for a sleek black-and-red that should go over better if Peter plans to swing by Paris or Milan. Consequently, it looks less like a skin-tight pair of pajamas. I'd gotten so used to Spider-Man looking like he's wearing pajamas that I do miss it.

The Stealth Suit goes full black-out with tactical gear (read: additional belts) and goggles. It also sports some fingerless gloves, leaving Parker's delicate lil' fingertips the only bits of exposed skin on his body. I still don't know how his feet can stick to walls through those thick boots.

The lineup of paid Spider-Man PS4 DLC ended back in December, but Insomniac Games has kept piling on the free suits since then. That includes the slick white Future Foundation suit and a stylish Bombastic Bag Man suit, which proudly placed a paper bag atop Parker's heroic noggin. If the new suits stop here, we'll still have plenty to be thankful for, though I can't help but wonder if Insomniac is cooking anything else up.

Save up for future Spider-Hijinks with our early look at Amazon Prime Day game deals.