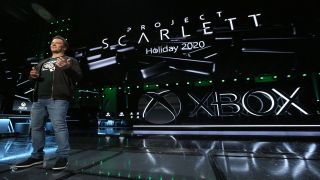 Gamescom 2019 takes place in Cologne, Germany from Tuesday, August 20 to Saturday, August 24, and you can generally think of it as a slightly calmer, more fan oriented after-dinner mint to the madness that was E3 2019.

That's not to say there won't be announcements from the annual industry expo, though, and this year's Gamescom could be even more important than most, now that we know both Microsoft and PlayStation will be in attendance, presumably to announce more about their plans for the future of 2019 and beyond.

This news arrives via a Twitter user by the name of GraviKnight, who uncovered confirmation of Microsoft and PlayStation's attendance via some promotional material announcing the full lineup of "Gamescom 2019 Guarantees", which also includes Bethesda, 2K Games, Capcom, EA, and more.

PS5's next-gen PSVR headset will be wireless, cost $250, and can even track your eye movement

Microsoft has made an increasing effort to show up at Gamescom in recent years, but the news of Sony's attendance speaks volumes, given that the tech company decided to avoid E3 completely this year as it continues to work on its confirmed next-gen console, the PS5.

It's unlikely, but not impossible, that we'll be hearing any more news from PlayStation about that hardware at Gamescom itself, and the same goes for Microsoft's own upcoming console, the Xbox Project Scarlett, but either company wouldn't be showing up unless they had something to announce, so it's worth staying tuned either way.

You can keep an eye on GamesRadar in the lead up to, and throughout, Gamescom 2019 for all the big news as it arrives, but - in the meantime - don't forget that the San Diego Comic Con 2019 schedule kicks off today, promising all sorts of information about Marvel Phase 4, The Walking Dead season 10, and much more.

For more, check out all the big new games of 2019 still on the way, or watch our Release Radar below for a guide to everything else out this week.