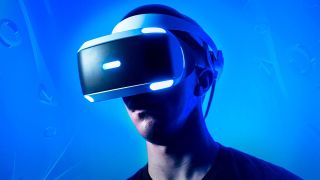 Information about Sony's in-the-works next generation console, the PS5, has been leakier than a Rapture pipe on a bad day in BioShock, so much so that we even know a fair few things about its accompanying PSVR headset.

After having PS5 confirmed to us earlier in the year, a subsequent slate of patent leaks have revealed more about Sony's next steps in the virtual reality, particularly with regards to its next-gen PlayStation VR headset.

As reported by Inverse, a slate of recently surfaced patents and trademarks filed by Sony reveal a number of details and prototype pictures of the PS5's equivalent PSVR headset, which will apparently cost $250 in the US, boast eye and head tracking technology, and can even run wirelessly with up to five hours of battery life.

If you're one for the granularity of VR specs, these patents also suggest that Sony is aiming for a 560-by-1,440 resolution with the PS5's new headset, alongside a 120-hertz refresh rate, and a 220-degree field of view.

Earlier this year, another leak suggested Sony may be developing a VR glove with haptic feedback, which - when paired with the head and eye tracking capabilities of this rumoured headset - could create some of the most immersing virtual reality games yet.

Sadly, we still have no idea about a release date for either the PS5 or any of its compatible accessories, but the current bets are for late 2020, especially as Microsoft has already confirmed a launch window for its next-gen console, the Xbox Project Scarlett.

For more, why not watch our Release Radar video below, or check out our guide to the biggest new games of 2019 on the way for this year and beyond?