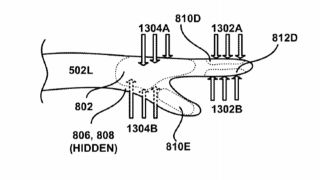 Breaking news from the thrilling, white-knuckle world of copyright patents (yes, I know): Sony are working on a VR glove. Designed to deliver haptic feedback for your fingers, it’s one step closer to the trippy future you see in movies like Ready Player One. Well, that or a repeat of Nintendo’s infamous Power Glove debacle.

Described in the sexiest of terms as a “glove device”, the new patent notes that this “glove envelopes said finger of the user that contacts the user interface device, and the haptic response processing module uses the haptic profile to impart changes to the haptic feedback based on a type of interaction detected”. If you just glazed over, that’s OK. It basically means that the glove will provide feedback for when you touch a virtual object.

Because Vanity Fair’s Star Wars photoshoot is fresh in our minds, let’s say you pick up a virtual lightsaber within the game. You should in theory be able to feel the hilt in your hands even though there’s technically nothing there. That’s a tremendous step forward for VR technology. What’s not clear is whether this would work with the current PSVR model or a successor on the upcoming PS5.

So far as we can tell, the VR glove would achieve all this through a clutch of impressive gear. That shopping list of components includes compressed gas, liquid, an electric motor, a heating/cooling element, and more. Which doesn’t mean the device will definitely use them, of course; more that Sony is considering them.

Regardless of what makes the final cut, these parts come together to provide far more nuanced feedback than you’d expect. As the patent says, “the [head mounted display] is used to identify interactions between the glove device and the virtual object and define a magnitude or type of the haptic feedback provided to at least one portion of the glove device”.

Although the glove gets the lion’s share of attention, there’s an interesting line that suggests the technology could also be used in “an article of clothing capable of being worn by a user such as... a hat, footwear, pants or shirt.” I’m aware that they’re using ‘pants’ in the US sense here, but I’m just going to pretend it’s the UK underwear version because that’s infinitely funnier. While I can’t imagine PlayStation rolling out VR briefs anytime soon (and there’s no indication of any clothing being used other than the glove), the possibility of a full VR suit is fascinating.

Want to get in on the ground floor? You can find the best bargains, price-cuts, and savings in our guide to PlayStation VR deals.