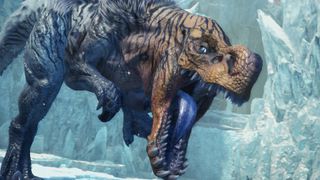 The Monster Hunter World: Iceborne Fulgur Anjanath really puts the thunder into thunder lizard. It’s a variant of the fire-spitting T-Rex from the base game but electrically charged and just a little bit angrier too. It’s no surprise it’s irked either, as it calls Hoarfrost Reach its home and it’s incredibly cold there.

The Iceborne Fulgur Anjanath is a brute Wyvern and uses the thunder element to empower its physical attacks, launching explosive volts, and deliver bone-crunching bites that can make short work of even the most experienced hunting parties. As a result, taking down this terrifying T-Rex can prove rather difficult, especially when you’re only familiar with the regular species of Anjanath.

If you find yourself struggling to survive this high voltage fight and want to pull the plug on Fulgur Anjanath thunder, then make sure you follow our monster guide below to discover the tips and tricks you need to survive this electrifying battle.

Fulgur Anjanath empowers its attacks by storing electricity, then unleashing shocking bites and ranged AoE thunder whenever it feels threatened. Just like its fire breathing relation, Fulgur Anjanath are highly aggressive predators that will attack anything that dares to so much as look at them. When enraged, Fulgur Anjanath will flash its bright blue frills to intimidate its foes.

Fulgur Anjanath’s thunder attacks can quickly drop your health bar to zero, especially if you’re unfortunate enough to get caught by one of its many shocking bites. It tends to chain these together in combos of two or three, so staying underneath it or behind it is the safest thing to do. You’ll want to keep well away from this beast’s jaws, so only clobber it round the head when you have a safe window to do so. For example, after Fulgur Anjanath has used one of its ranged electrical attacks be sure to lay down the damage during the animation’s downtime. Fulgur’s electrical attacks will inflict the hunter with the Thunderblight ailment. Thunderblight increases the chance of being stunned by monster attacks and is made all the more terrifying by the speed at which this monster can unleash attacks.

Packing Nulberries will cure this ailment and help reduce those frustrating stuns that lead to an untimely demise. If you’re tired of watching your health melt away, then also consider grabbing an armor set that has good thunder resistance. Fulgur Anjanath’s attacks will become even more explosive when it becomes enraged, so the extra resistance will really help you survive against some of its most devastating attacks. Lastly, make sure to keep your distance when Fulgur bites the ground, as it will unleash a massive blast of electricity that will both shock and send everyone caught within it flying. It’s best to bring an Ice, Water, or Fire weapon to help bring this beast’s health down faster, as it is weak to all three of these elements.