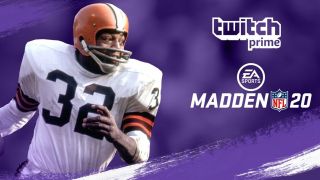 Following the introduction of FIFA 19 Twitch Prime freebies, EA is now extending the giveaways to Madden 20 – beginning with NFL legend Jim Brown. The former Cleveland Browns running back and nine-time Pro Bowler is available to all Twitch Prime members, and will appear in the ‘Games And Loot’ section of the site for anyone who’s signed up.

Wondering how to add Brown to your roster if not already a Twitch Prime member? Then let us steer you through the process…

2. You’ll now be automatically be prompted to confirm that you wish to link your Twitch and Amazon accounts. If that doesn’t occur, go to the top left of the Twitch Prime page and choose the ‘link Twitch account’ option. That will bring up the necessary prompt, and your accounts will be linked.

3. Next up, head over to your loot page which should be immediately visible in Twitch Prime, and select Madden 20. Hit ‘claim now’, and you’ll be prompted to sign into your EA Account. (If you don’t have one, sign up here.) Do that, hit ‘claim’ and the player is all yours - although you need to go into the game itself on your regular format to utilise him.

Note that if you’re not already a Twitch subscriber Prime is free for the first 30 days, but then goes up to $10.99/£7.99 per month. So if you’re only signing up for the Madden 20 Twitch Prime reward then be sure to cancel well before that 30-day trial ends.

Brown is the August reward, and those who keep their membership into next month will unlock another Madden 20 exclusive: an Twitch Prime uniform to use in Ultimate Team.

Madden 20 is out now, with Patrick Mahomes on the box – here's a look at the nine players he beat out to win the Madden 20 cover vote.