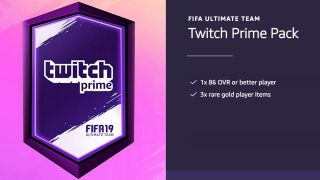 Heard the one about the free FIFA 19 Twitch Prime pack? This deal has been live for a short while, and is still available during the Amazon Prime Day game deals. Much as it may sound like a joke or a scam, there’s no punchline to this one. EA is currently giving away a FIFA 19 Twitch Prime pack, containing an 86+ player along with three rare gold items, to all subscribers to the service. How do you get it? Read on below.

2) From here, you should automatically be prompted to confirm that you wish to link your Twitch and Amazon accounts. If that doesn’t occur, go to the top left of the Twitch Prime page and select ‘link Twitch account’. That should bring up the necessary prompt, and your accounts will be linked.

3) Next up, head over to the FIFA 19 loot page which should be immediately visible in Twitch Prime. Hit ‘claim now’, and you’ll be prompted to sign into your EA Account. (If you don’t have one, sign up here.) Do that, hit ‘claim’ and the pack is all yours - although you need to go into the game itself on your regular format to open it.

For me that meant starting up the PS4, opening FIFA 19, and selecting Ultimate Team. Sure enough, the FIFA 19 Twitch Prime pack was waiting under My Packs. The three rare gold cards were nothing special, but an 86-rated MOTM Fabian (Napoli) more than made up for it.

Note that if you’re not already a Twitch subscriber Prime is free for the first 30 days, but then goes up to £7.99 per month. So if you’re only signing up for the FIFA 19 Twitch Prime pack then be sure to cancel well before that 30-day trial ends.

This piece of content is only available once, but EA is promising another Twitch Prime promotion imminently which will give all subscribers an 87-rated player. Also note that it’s not available in India, China, or other embargoed territories.

FIFA 19 is out now. Got some end-game coins you want to splurge on the game's elite? Then check out our look at the 10 best players according to their FIFA 19 ratings.