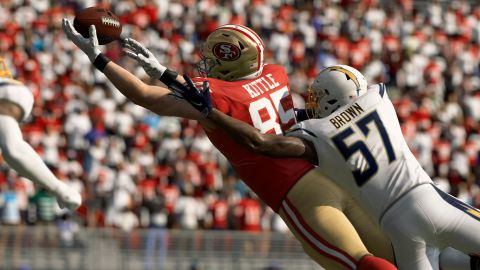 Predecessors to Madden 20 put themselves over as games built upon three pillars, but those pillars were crumbling. Ultimate Team was a riptide of menus, modes, and microtransactions to drown in. Longshot story mode was an abject disaster in Devin Wade’s second season. Franchise had once been the surefire reason to justify an annual purchase, only to be largely abandoned for a period which – not coincidentally – began with the rise of Ultimate Team.

This year, Tiburon’s sim doesn’t have three marquee features to put on the back of the box, but its two major changes and several smaller ones go far. Like a former contender going through a rebuilding phase, Madden 20 restores the foundation and promises a deeper and more accessible series for the years ahead.

Developer EA Tiburon first tried its hand at storytelling with Madden 18’s Longshot. It was a flawed debut but nonetheless left me hopeful for the future. To my eyes, last year’s sequel to Devin Wade’s story was so stunningly bad - Rob-Schneider-as-the-Cowboys-GM-bad - that the whole experiment needed to be blown up. Madden 20 does that. Tiburon has severed all ties with Devin and Colt: Instead, Face of the Franchise is introduced as the new story-driven mode in its place, and it feels a lot more like the fondly remembered Superstar mode from 15 years ago, or more recently, the laissez-faire approach of NBA 2K.

After creating your quarterback and choosing your college as a blue chip recruit, you’re benched for an even bluer chip for four years. The story feels rushed early on, but knowing what a more hands-on approach looks like, I’ll take it. Eventually, you’re thrust into your first career start in the playoffs of your senior season. Capping off your college years before you go pro has been a staple of other sports story modes with often great success, and it feels overdue but welcome to finally run around in Madden 20 wearing the jersey of one of 10 major programs like Oregon, LSU, and USC.

How you perform in the playoffs and combine dictates how early you go on draft day. From there, the rails of the story are removed and the game morphs into regular franchise mode with play limited to your quarterback. One last bit of scripted story comes at the end of your first season, and no matter how you end the year, it’s told succinctly. This brevity is what keeps it compelling. There’s enough to give you context to who your athlete is and where he’s come from, but it doesn’t give you all the poorly written details like Longshot. It lets you fill in the blanks with your own season schedule and career beyond.

Traditional Franchise hardly gets any attention – yet again! – with the one notable improvement being more control over how you upgrade your players, as well as more opportunities to do so. Conversations unfold via text messages with the media, your players, and rival stars, and how you respond to them determines what your goals are week to week, and where your XP goes over the season. It’s a minor change built on top of last year’s broader fixes, but sadly annual players know by now to expect nothing more than modest iteration from Franchise as the industry continues its collective burrowing into fantasy card collecting.

The rich get richer

The NFL prides itself on its league-wide parity, but the delta between great players and the truly elite has never seemed wider. That’s represented in Madden 20 with X-Factors, new abilities that can be activated across all game modes with the league’s 50 most dominant players. Last year’s game brought Superstar passive abilities, and while those return, they now play second string to X-Factor skills like Pro Reads, which let QBs like Brady and Brees see open receivers highlighted on screen, or Unstoppable Force, enabling defenders like Mack and Bosa to blow up opposing linemen faster in the trenches.

These skills have to be earned by performing certain feats, usually in bunches of three. Once activated, players are in the “zone” and remain there until the opposition attains cooldown parameters. As X-Factor skills can be wiped out on a single play, the feature seldom feels unbalanced. It might sound like a lot, but as an arcadey representation of sports’ fabled and unseen momentum gauge, it works well. We’ve seen players like Aaron Donald and Tyreek Hill ruin gameplans for three hours every week for years, so this is EA’s way of bringing that to Madden. It does so in a way that adds a new layer to the game no matter how you’re playing it.

Despite being the lucrative focus of every Madden for nearly a decade, Ultimate Team has never felt accessible, but that’s finally addressed in a clear and helpful way in Madden 20. Missions are the first thing you see when you hit the menus, and they act as the tour guides through MUT’s once-daunting plaza of challenges. In years past, there’s been such a dizzying array of game modes that it’s felt like there’s no jumping-on point for new players. Missions now greet you with the necessary guidance, and though UI redesign doesn’t get its own promotional trailer, it’s a change that players new and old will benefit from, making it more exciting than one may expect.

Every year brings more MUT content than the last, but this year it’s been neatly streamlined. Challenges flow from one to the next with only brief loading screens between them, keeping you engaged since many can be as quick as a single play. However, online play still drives you towards the temptation of (at least) a few purchased card packs. EA would love for you to buy some cards, that’s abundantly clear. It hasn’t made the rate at which you earn them without your debit card any faster - except for the better UI which keeps you moving more purposefully. MUT is a mode of near-infinite carrots on near-infinite sticks, but at long last, players can better understand how far they are from the carrots they’re chasing.

Building for the future

Few adjustments to this year’s game occur on the field, but that’s okay. Madden has never been better in that regard than it has been over the last three years. This year’s game is more about rounding out the roster for the new era of Madden by improving its accessibility and finding new direction where it was needed. Story mode now has a clear path ahead with the lighter hand of Face of the Franchise, MUT finally feels like something new players can wrap their heads around, and X-Factors replicate the league’s game-changing talent in a authentic, effective way. The Pro Bowl is a very welcome, if absurdly late-to-the-party, addition too.

Collectively, it feels like Madden is in the early stages of re-building a perennial contender. Like drafting a left tackle with the first overall pick, the changes to Madden 20 aren’t flashy, but they feel like the right moves to make in order to compete for years to come.

Reviewed on Xbox One.