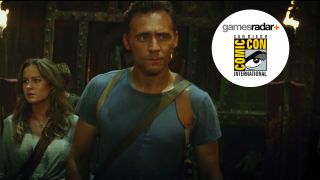 Warner Bros. is really pushing for its best-ever Hall H appearance at San Diego Comic Conthis year. After a slew of unexpected superhero footage - you know, the Justice League - blew away crowds, the studio then unleashed the first teaser for Kong: Skull Island. Check it out, folks:

That's a lot of firepower from the military forces - but that's nothing compared to the guns on Loki! I mean, Tom Hiddleston. He looks right at home busting out some action hero moves alongside his co-star Brie Larson, who appears equally impressive in this brief teaser. There's a flavor of Indiana Jones about it - all those torches - and a smidgen of stylized cinematography that's reminiscent of Apocalypse Now. But neither of those movies starred massive simians.

Touted as a remake, reboot or some other as-yet undiscovered descriptor, the movie is part of a new cinematic universe. Because, of course. This may shed light on why this version of Kong is such a towering figure; he's got to go up against Godzilla in 2020 for their beastly version of Civil War/Dawn of Justice.