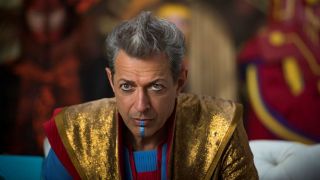 Thor: Ragnarok is colourful. And amazing. And full of Jeff Goldblum. Whether the Jurassic Park star’s turn as the kooky Grandmaster is a one-and-done thing, though is left up in the air. Thankfully, for those who are wishing to see more of one of Marvel’s, let’s just say… unique characters, he’s got a fan in Marvel Studios head honcho Kevin Feige.

Speaking to Fandango, Kevin Feige opened up on The Grandmaster’s relationship with his brother, none other than Guardians of the Galaxy’s Collector, and whether they could appear on the same screen, “It would be awesome, man. It would be great."

"We love the idea that they're brothers. If you go on the Guardians of the Galaxy: Mission Breakout attraction at California Adventure in Anaheim, you will see a picture on Collector's wall of he and the Grandmaster playing some sort of a space chess game, which right now is the only place you can see the two of them in a frame together. But let's hope that changes someday."

If nothing else, that sure sounds promising. Feige doesn’t hesitate on giving out a big fat no if there isn’t any chance of something happening. Time to cross all of our fingers and toes.

Marvel’s foray into the cosmic side of things has left the door wide open for a Jeff Goldblum return. He certainly appeared to be having lots of fun – and that’s without even mentioning his Jurassic Park rendition in our interview – and you’d think pairing him up with Benicio del Toro would be exceptionally eccentric – and worth the price of admission alone.

Guardians of the Galaxy 3, anyone?