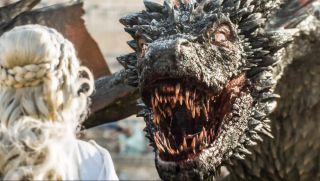 You might notice something different about the dragons in Game of Thrones season 7. No, they didn't get veneers on their teeth or put in colored contacts - they're roughly the size of jumbo jets now. Matt Shakman, who is one of four directors working on the upcoming season, enthusiastically recounted the expanded dragon dimensions to Entertainment Weekly.

“The dragons this year are the size of 747s,” Shakman said, presumably with childlike glee. “Drogon is the biggest of the bunch - his flame is 30-feet in diameter!”

What does that really mean, though? The dragons were already pretty big, right? Well, here's a picture of a Boeing 747-8 under construction in a hangar, courtesy of Lufthansa, to give you a better sense of the dragon scale for season 7.

Imagine all that but… dragon. Now about Drogon's gout of flame. Did you ever play with the big bouncy parachute thing in gym class? Here's a picture of one that's 30 feet in diameter, via Amazon.

Game of Thrones season 7 will debut June 16 on HBO in the US and June 17 on Sky Atlantic in the UK.