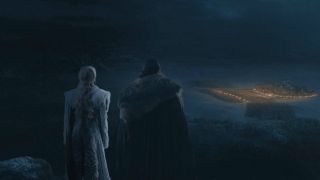 Game of Thrones season 8 just aired the longest on-screen battle in entertainment history, but HBO is already laying the ground work for next week with its trailer for episode 4, which takes us back to King's Landing after the events of the Winterfell siege.

The trailer, which you can view below, is as vague and cryptic as usual, setting up another war with Cersei and her Golden Company, it will nonetheless bring a small amount of relief to any Ghost fans in the room. Spoilers for Game of Thrones season 8 so far, but during the battle of The Long Night, it appeared as though Jon's Dire Wolf charged headfirst into certain death alongside the Dothraki, never to appear again during the events of the episode itself.

This led many fans to presume that the poor doggo had met an untimely demise at the hands of the Night King's army but, thankfully, the new trailer has a blink-and-you'll-miss-it moment that does indeed confirm Ghost survived the battle. Pause the trailer at the 0:18 mark, where we see Daenerys and co burning the bodies of the dead, and you can just about spot Ghost hiding behind Samwell Tarly in the background.

It's hard to distinguish, but he's definitely there. This will come as reassuring news for many, but it's also emblematic of the fact that Game of Thrones doesn't care about its Dire Wolves as nearly as much as the show's fans, continually forgetting to give us updates on each one's location and state of well being in Westeros.

If you ask me, Ghost deserves to be the one to sit on the Iron Throne at the end of all this. The four legged hero jumped into a horde of Wights and won, and he doesn't have opposable thumbs. C'mon, you know it's the twist ending this show deserves.

For more on the latest happenings in Westeros, check out the Game of Thrones season 8 Battle of Winterfell reactions from around the internet, or watch the video below for a full recap of episode 3.