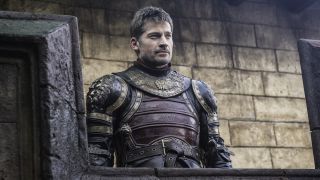 The Lannisters will send their regards, and then some, if these Game of Thrones season 7 set photos are anything to go by. If that wasn’t enough, Jaime Lannister has replaced Oathkeeper and the Lannisters look like they have a new ally…

Spoilers are coming. You have been warned.

As reported by WOTW, these set photos from Spain show Jaime, Bronn, and a legion of soldiers (complete with army-boosting green screen naturally), getting ready to do battle with an unknown foe.

Putting up the greenscreen will make it even bigger. #JuegodeTronos #GameofThrones pic.twitter.com/Uofya0IYkH22 November 2016

It is hard to tell but the guys on the horses look a bit like Bronn and Jamie. #JuegodeTronos #GameofThrones pic.twitter.com/Kax3ffXVri22 November 2016

More close-up photos reveal Randyll Tarly (that’s him below in the second photo propped up on a white horse), who has been seen filming in Spain already, and his son Dickon (that’s Sam Tarly’s brother if you’ve lost track) seemingly joining forces with the Lannisters.

Why is this big news? Well, House Tarly should be cosy with the Tyrells, but it looks like they’re intent on betraying them in favour of fighting under the Lannister banner. Let’s face it, their crest is cooler.

Jaime Lannister also turns up at Highgarden, home of the Tyrells, and he’s carrying a Valyrian sword, which appears to be Widow’s Wail - Joffrey’s former sword.

This means that Ned Stark’s dual Valyrian swords are now in the hands of Brienne and Jaime. If there isn’t a final metaphorical and literal showdown between the Fire and Ice swords with the pair going toe-to-toe, then fans are going to be bitterly disappointed. Or relieved. One of those. Either way, I don’t think my heart could take it. Can’t they just take another awkward bath together?