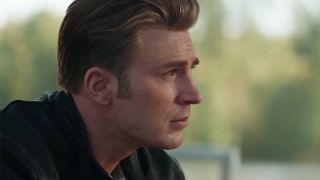 Grief can affect us in different ways. Take Avengers 4, for example. People are (inevitably) combing through every frame of the Avengers 4 trailer looking for clues about those that are missing or dusted away. And they’ve found someone. Maybe. I’m not so sure, but you can be the judge of that.

According to those on Twitter, there seems to be some consensus that Guardians of the Galaxy member Groot is hiding behind Tony Stark in his ship during a single frame. Remember, he shuffled off his mortal soil in Avengers: Infinity War so for him to come back to life in some way would be tree-mendous. Take a look.

Personally, I’m not convinced. For one thing, whatever that is looks a little bit too shiny to be Groot. The brooding branch-based lifeform is all twigs and splinters – not whatever is appearing behind Tony Stark. It does look a little like the Guardians lifepod that Groot, Rocket, and Thor took to go and forge Stormbreaker, but even that’s a stretch.

More realistically, it could be Nebula, as she was last seen on Titan with Tony. If Stark needs a rescuer, Nebula would be the most likely (and obvious) candidate, not Groot magically appearing out of nowhere.

However, with all of the ranting and raving about Iron Man being lost in space, it’s kinda been glossed over that, no matter if that’s Groot, Nebula, or simply a piece of equipment that we’re putting a face over to help us get over who died in Infinity War, Tony is in better shape there than at any other point of what we’ve seen from Avengers: Endgame.

So, for now, it’s more a case of I am (not) Groot – but things might be looking up for Tony.

No matter who is looking to help, they all need to take NASA's advice on how to rescue Tony Stark from space.