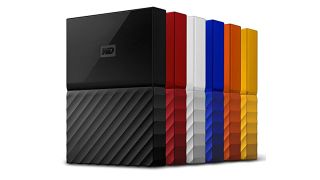 If you've just gotten a PS4 or Xbox One for Christmas, one accessory well worth looking out for in the Boxing Day deals would be a cheap hard drive. Although most consoles pack between 500GB-1TB of storage space these days, that'll still get filled up fast with all the updates, DLC packs, and game files you'll be installing. Fortunately, there are a range of discounts on our favorite HDD across the UK right now. You can pick up the 4TB WD My Passport hard drive for £80.49 instead of £95 at John Lewis, and we'll take any reduction we can get on products from the reliable and well-respected Western Digital. Equally, the 2TB model has seen a 25% discount on Amazon (bringing it down to £55.99), while the 1TB WD My Passport is a mere £42.40 instead of $65 on Amazon UK.

Any of these cheap hard drive deals will serve you well, but I'd recommend going for the 2TB model. Although the 4TB is better value for money at double the size, £80 is still a lot of cash to drop at once. Meanwhile, £56 is a little more reasonable. And hey, 2TB is still enough to see you through the next year or so anyway. It'll certainly take the pressure off your console's primary storage, particularly when persistent games like Destiny 2 or Fortnite eat up so much of it on a monthly basis. Even though it's not one of the best Boxing Day sales we've seen so far, it's not bad going.

4TB WD My Passport hard drive | £80.49 at John Lewis (save £15)
This is the biggest of the hard drives on offer, and there's more than enough storage here to last you for ages. View Deal

2TB WD My Passport hard drive | £55.99 on Amazon (save 25%)
The mid-range 2TB hard drive will see you through 2020 without many issues. A great choice if you don't want to spend a fortune.View Deal

1TB WD My Passport hard drive | £42.40 on Amazon (save 35%)
Despite being the smallest of the hard drives listed here, 1TB is still a good amount that won't disappoint.View Deal