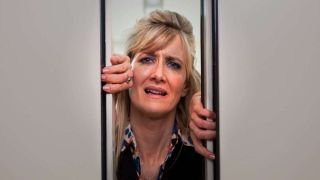 Watching every single TV series out there? An impossible task that will only set you up for disappointment! Catching up on the best shows on Amazon Prime Video? A little easier to accomplish, especially seeing as you have the GamesRadar+ list of stellar recommendations, ahem, to help aid your quest. Whatever the weather - we are reaching the end of winter, after all - there’s a show here to fit your viewing desires. Yes, there’s a lil’ something for everyone. But what should you start with?

Don’t fret, and don’t panic. We’ve got you covered. This list includes plenty of new shows and classic series that are absolute must-sees. You’ve got the likes of The Wire, The Sopranos, or Six Feet Under if you fancy a dramatic HBO fix, and The Expanse, Homecoming, and The Marvelous Mrs. Maisel if you’re in the mood for one of Amazon’s own genre offerings. That’s not all, of course. To help fully round out your viewing possibilities there is a bunch of other series to fill in the gaps too. So whatever your preference, and whatever you’re in the mood for tonight, we can guarantee that one of the best shows on Amazon Prime Video will hit the spot.

The show: It’s Sherlock Holmes but not as you know it. This long-running network stab at Arthur Conan Doyle’s iconic detective refreshes the stuffy persona typically associated with the character. Jonny Lee Miller plays the devil-may-care Holmes who relocates from England to Manhattan with his tail between his legs following a rehab stint. Upon his arrival, he learns that his father has hired a companion for him, Dr. Joan Watson (the brilliant Lucy Liu), a former surgeon seeking redemption after accidentally losing a patient. The duo soon become partners, helping the NYPD solve their toughest crimes.

Why it’s worth a watch: Somewhat overshadowed by the BBC’s Cumberbatch-starring Sherlock event series, Elementary rightly deserves its time in the spotlight. Miller is a delight, relishing in the role of a seedier, less morally-upstanding version of the do-gooding detective. Boiled down, it’s a procedural crime series but don’t let that put you off. Throw in the chemistry between Miller and Liu and it’s one of the most enjoyable cop shows around.

The show: Hugh Laurie turns off the charm and into curmudgeonly doctor Gregory House, an MD who specializes in diagnostic medicine along with making light of everyone’s woes. Don’t mistake him for a practitioner with a good bedside manner; all he cares for is cracking the case and popping pills to alleviate his chronic pain. Across the seasons, House investigates a bundle of weighty topics as the Doc and his rotating students attempt to solve the mysteries of the human body.

Why it's worth a watch: Laurie's performance is the epitome of a lovable antihero. He's brusque, selfish and inconsiderate. You still can't take your eyes off him. And, like all long-lasting shows, the format evolved from an 'illness of the week' procedural to a solid medical mystery serial, weaving in House's own trials and tribulations. It’s the perfect series to kickstart your fall bingefest.

The show: A rough 'n' tumble period piece that's not a million miles away from Game of Thrones, Vikings serves up a similar amount of blood-drenched violence, but none of the rampant nookie. Travis Fimmel leads the series as noted Norse figure Ragnar Lothbrok, a lowly farmer who becomes a respected warrior. That's after years of sailing the seas of Europe, of course, along with his wives and chums, in search of vulnerable countries to ransack.

Why it's worth a watch: The story itself is terrific, and along with its glorious production design, you’ll be drawn in and unable to stop yourself from one more episode. It's less concerned with the intricate political ties of the aforementioned HBO series, yet does err heavily on the side of fantasy. These are not the vikings you've read about at school; these are far more devious.

The show: Orphan Black mixes futuristic genetic technology with family drama and thrilling action - who knew those components would make for gripping TV? Well, they do. The show follows Sarah Manning (Tatiana Maslany), a young woman whose life is changed forever when she witnesses her doppelgänger commit suicide at a train station. That moment sets her on a complex journey to uncover the truth behind her identity, which is full of twists and turns that are, at times, dizzying.

Why it's worth a watch: Maslany's nuanced turns as a series of clones are nothing short of breathtaking. You may find yourself scanning the credits for the actresses who play Sarah's sisters and then slap yourself silly when you twig. Keep your eyes peeled for the moments when the clones impersonate one another. Thank goodness she finally won an Emmy for her flawless turn!

The show: Mr. Robot came out of nowhere to become 2015's big watercooler hit. It's about hackers, yes, but the technology wunderkind at the heart of this story is unlike any other onscreen depictions. Rami Malek plays Elliott Anderson, a computer genius who joins the ranks of the mysterious Mr. Robot under the pretense that their band of digital vigilantes will free society from the grip of corporate America.

Why it's worth a watch: Paranoid and tense, Robot rolls out like a thriller cooked up in the mind of David Fincher then siphoned through the bizarre lens of David Lynch. Its creator Sam Esmail showcases his eye for detail here, that ropes in styles of all kinds to craft an entirely unique thriller.

The show: Being a first-time parent isn’t a picnic. Especially when your partner is from another country. And you don’t really know them that well... or have indeed only met them once. Throw these factors into the pot and you get the beginnings of one of Amazon’s most seriously underseen comedies. Sharon Horgan stars as an Irish schoolteacher in London who embarks on a week-long affair with Rob Delaney’s Boston ad exec. Their efforts to stay together after they discover they’re pregnant are what drive the series into hilarity and, at times, heartache.

Why it’s worth a watch: Funny as hell, do it for ya? Horgan and Delaney, who also wrote the entire show together, make their experience relatable and humourous without resorting to silly gags. Plus, Carrie Fisher’s cameo as Delaney’s mom is divine. Her little dog Gary even cameos with her!

The show: Plenty of HBO’s high-profile series are available on Prime. One that’s tucked away in the comedy section is this scathingly sublime show that is bound to make you feel seen. Laura Dern stars as Amy Jellicoe, a frustrated corporate exec burning the candle at both ends and feeling like she can’t put a foot right. Following a public meltdown that spirals out of control, causing massive humiliation, she takes a leave of absence for three months. Where? To a new-age retreat in Hawaii. It’s when she gets back that she realizes her friends and family still don’t accept her, despite her own personal changes. Something that everyone can relate to.

Why it’s worth a watch: While her Oscar-winning performance in A Marriage Story is top-tier, Dern gives a performance for the ages as Amy, who struggles to connect to those around her in workaholic mode, and likewise afterward when she finds an albeit cringy form of peace. While only two seasons long, this is well worth diving into for one of HBO’s most underrated dramedies.

23. The Man in the High Castle

The show: Imagining what the world might be like had the allied forces lost the second world war is terrifying. It’s an idea so frightful that sci-fi mastermind Philip K. Dick scratched out his 1962 novel based on that concept, from which this Amazon Original series takes its inspiration. The world no longer looks the same. Under Nazi rule the sprawling North American continent has been divided into three territories, and it's inside those borders that this gripping story of a small Resistance group unravels.

Why it's worth a watch: As an alternate history, not necessarily a distorted reality, the show is gripping. It makes for such compulsive viewing because it bears so many recognisable emblems from the real world. As well as a few choice slips into genre territory...

The show: Who doesn’t like watching a bunch of incredibly wealthy people from 20th century Britain swan about on an estate? Downton Abbey captivated the TV landscape when it debuted in 2010, capturing the hearts and minds of, well, millions of viewers. The fictional Crawley family lead the story, as their lives are interwoven with real-life historical events. The sinking of the Titanic in 1912 kicks things off with World War I coming to serve as a major plot point. All the while the drama and politics of the Crawleys - and their arsenal of servants - becomes all the more intriguing.

Why it’s worth a watch: A British corset drama. An exceptional aristocratic affair. Whatever you want to call it, Downton Abbey is a darn good soap opera. With more twists, turns, and plot revelations that you’d expect from a period piece about a well-to-do English family, this is a compelling binge-watch in disguise. Watch all six seasons now before the movie drops in September.

The show: After his release from prison Marius (Giovanni Ribisi) decides to get creative with his new-found freedom. Instead of picking up where he left off, which is at the mercy of gangster Vince (Bryan Cranston) for the $100,000 he owes, Marius opts to take over the life of his cellmate Pete who remains behind bars. Pete’s estranged family welcome “Pete” back into the fold as if nothing’s happened, and Marius starts to discover that his new clan might be a source of further strife.

Why it’s worth a watch: Its well-written scripts and fantastic performances are what have turned Sneaky Pete into one of those sneaky shows that wheedles its way into your mind and refuses to let go until you’ve watched just one more episode. This is top-notch viewing that’s a relentlessly bingeable mix of crime, comedy and drama.