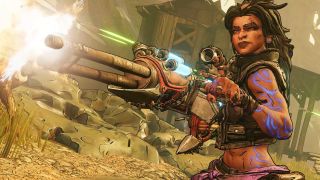 Obviously you want to know what the best Borderlands 3 guns are and where to find them. The range of weapon effects is wide ranged, including everything from increased damage or status effects, to the just plain weird and wonderful fun. So if you're after a pistol with an under-barrel taser for added electrocution, or a gun that does extra damage when rammed into someone's rear end, we've got you covered.

This guide to the best Borderlands 3 guns will give you a head start, filling your arsenal with a wide range of useful, weird, or just plain silly weapons.

How to get it: Dropped by Mouthpiece in the Holy Broadcast Center as part of the Cult Following quest

Unfortunately, The Killing Word is one of Borderlands 3's new temporary, Children of the Vault-based weapons, which eventually break after repeated use over time. Until that inevitable degradation, though, the repeater pistol boasts an unlimited magazine size, which is only slightly offset by its tendency to overheat if the trigger is held for too long. In any case, this mini machine gun deals serious damage for the brief time it lasts, and it looks super cool too. Inspired by Mouthpiece himself – Borderlands 3's first big boss – The Killing Word fires off neon rounds of sonic waves at enemies, lighting up any room like a futurist dance floor.

How to get it: Reward from Ellie for completing the Dump on Dumptruck side quest in The Droughts (including bonus objective)

To receive Buttplug, you'll need to literally shoot a boss by the name of Dumptruck in the ass. There's no getting around that, but it's part of Ellie's request as part of this bounty mission, and it's worth it for this Rare tier Jacobs revolver. The weapon's nerfed damage (-86%!) isn't to be taken lightly, but that's more than balanced out by increases of 110% to melee damage and 23% to reload speed, which suits it for up-close-and-personal fights and those with laser fast trigger fingers. The Buttplug's in-game description also states it "works best from behind", meaning it can one-hit most enemies whenever you whack them in their rear end… so there’s that.

How to get it: Reward from Vic for completing the Head Case quest at the Holy Broadcast Center

To compensate your valiant efforts to save Vaugn's best friend from a VR torture chamber, you'll be awarded this snazzy sniper rifle, which not only features several damage-buffing perks, but allows the user to switch between serving either Shock or Corrosive elements to its victims. That makes Brashi's Dedication perfect for eating through enemy shields with Shock or metallic armour on robot enemy types with its Corrosive setting, so long as you're staying conscious to keep switching between the two modes depending on the situation. The rifle also has two scopes for close and long range combat, too, rendering Brashi's Dedication as one of the most versatile weapons you'll find this early in the game.

How to get it: Begin the Skag Dog Days quest in The Droughts and complete the first objective

Don't be fooled by The Big Succ's stupid name and Uncommon tier rating, this quest-specific firearm is the first rifle you'll find with an underbarrel grenade launcher, making it ideal for crowd control and area-of-effect multi-kills on those pesky swarms. It's primary fire mode is, well, just fine, but the fact that the underbarrel uses the gun's combat rifle ammo, The Big Succ essentially gives you access to a huge stockpile of grenades beyond your usual handful of throwable explosives. Basically, use The Big Succ the right way, and you'll be cutting through enemies like a knife through warm butter.

How to get it: Reward from Ellie for completing the Taking Flight quest in The Droughts

This Vladof pistol's alternate fire mode is an under-barrel taser that, when fired, inflicts damage over time in addition to its initial impact shot. That, alongside its primary fire mode's incendiary effects, makes it particularly useful against Pandora's living organisms, whose flesh doesn't take too kindly to such elements. The Leech also provides a 40% melee damage bonus, so be sure to get up close and person when you've got this Epic tier handgun equipped. It can be picked up right before leaving Pandora for the first time, as part of the final main story quest in The Droughts, and can be handled once you reach Level 7.