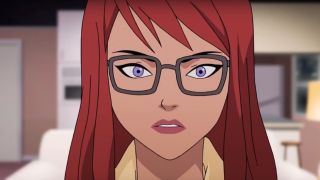 Batgirl is a pivotal part of Batman: The Killing Joke, both in the original comic and the upcoming animated adaptation. So you can't just put anyone in her cowl and expect a worthy performance. Thankfully, DC has brought in Tara Strong, who voiced Batgirl/Barbara Gordon in The New Batman Adventures back in 1997, to reprise her role. And judging from this behind-the-scenes sneak peek, fans are going to be in for a treat:

I admit that I never realized it was Strong who voiced Batgirl from '97 to '99, and I always thought of her more for her high-pitched and squeaky-voiced characters like Timmy Turner (Fairly OddParents) and Bubbles (The Powerpuff Girls). Watching Batgirl take down some thugs and hearing Strong talk about the role however, I might have to rethink that.

Batman: The Killing Joke will be in US theaters for one night only on July 25, before being released digitally on July 26, and finally to DVD and Blu-ray on August 2.