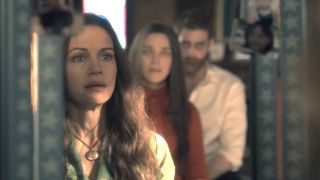 Hold onto your adrenal glands, because we just found out that The Haunting of Hill House season 2 will, in fact, be a horror anthology series rather than a direct sequel. It will be out in 2020 and it's based on the work of Henry James, who wrote the 1898 creepfest The Turn of the Screw.

You guessed it. The HAUNTING OF BLY MANOR, a new chapter in the Haunting series based on the works of Henry James, is coming in 2020. pic.twitter.com/nvhRBEfH2EFebruary 21, 2019

A new Haunting is coming. Can you guess where it takes place? Listen closely... pic.twitter.com/vqzrd3z4NZFebruary 21, 2019

The Turn of the Screw mixes ghosts and madness as a governess arrives at Bly Manor and takes over the care of two children, only to become convinced the family is being visited by ghosts. It's fertile ground for a new horror series to work with, and The Haunting of Hill House certainly proved that its creators can adapt historical horror fiction with terrifying results. The series will air on Netflix, which is fast becoming one of my most reliable sources of nightmares.

“Mike Flanagan and Trevor Macy are masterful at creating authentically frightening stories that leave audiences on the edge of their seats, but unable to look away,” Netflix's Cindy Holland told Deadline. “We’re excited to continue our partnership with them on The Haunting series and future projects to come.”

Unless the show's creators take on the American Horror Story tradition of bringing back the same actors in new roles, it's unlikely we'll get to see any of our favorites in Bly Manor. Not that the cast wouldn't be interested.

"Very early on, when we were still shooting this show, we had conversations about what a second season could look like and I think that one of the crazy things about Mike (Flanagan) is that he is an infinite well of ideas and stories," said Michiel Huisman, who played Steven Crain.

"I don’t think he ever sleeps! There are possibilities - if the show is a hit - to create a second season and still be in this world of Hill House."

Embrace your nightmares with the best Netflix horror movies to stream right now.