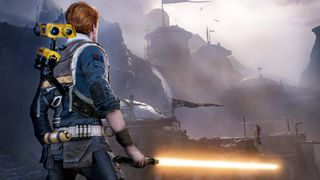 At the time of writing, Respawn has been very tight-lipped about any Fallen Order DLC. Long before the game launched back in April 2019, the community manager at the time said that Respawn had "no plans for DLC" and that the priority is to release a "strong, self-contained story".

Since then, that hasn't changed. Now the game has launched to such critical acclaim however, plenty of players have been clamouring for some Star Wars Jedi Fallen Order DLC. It's important to note that "no plans" isn't a definite no, so the success of the title could lead to DLC in the future.

It's worth noting however that in an interview with GamesRadar, Respawn's brand strategy director Charlie Houser said that they would "love to keep telling that story in Star Wars". Whether that's going to be in the form of story DLC or a fully fledged sequel on PS5 and Xbox Series X, only time will tell.

While DLC seems a long way off, the team at Respawn is regularly updating the game, with patches hitting fairly frequently. Could we see a Fallen Order NG+ mode introduced through a free update? It's possible, and has been done often in the past, not to mention it certainly makes sense given Fallen Order's inspiration from the Souls franchise and metroidvania genre.

Again though, there's no official word from Respawn. Players want a NG+ mode so badly, there's a fan-made mod available on Nexus Mods for PC that essentially enables NG+, although you still need to obtain all the abilities yourself. It's not a perfect solution, especially since it doesn't help for console players, but it's a workaround for now.

If any news about Fallen Order DLC does surface, worry not because we'll update this in no time at all. For now however, why not read up on everything we know about The Mandalorian season 2 for your Star Wars fix?