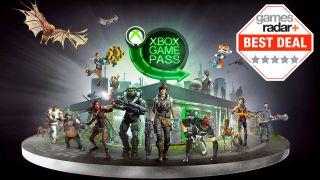 Action stations, people - there's a cheap Xbox Game Pass deal that slashes the price of a 3-month membership down by a head-turning 71% on CDKeys. That makes it cost a grand total of $9.39 or £6.99 depending on which side of the pond you live, which is significantly cheaper than it should be. That's actually a few percent cheaper than it was a few days ago. A crazy deal!

Better still, this cheap Xbox Game Pass deal is available for anyone and everyone; unlike some offers for the service, it's not exclusive to new members. That means you can grab it to kick off your Xbox Game Pass membership for the first time or add it to an existing sub. Either way, you're unlikely to find a better discount anytime soon. This is comfortably the best value for money we've seen, beating out the swathe of Ultimate Game Pass discounts we've had in the last few weeks.

One thing worth bearing in mind with this cheap Xbox Game Pass deal is that it isn't for the Ultimate version; it doesn't get you an Xbox Live sub or access to the PC membership. However, it will give you over 100 games on Xbox One to download and play. That includes every Xbox One exclusive - such as Gears 5 and the entire Halo series - but also other big recent releases like The Outer Worlds and Wolfenstein: Youngblood. It's probably one of the best things Xbox has done in the last few years, so I can't recommend picking it up enough. In a time where big-budget releases will set you back a pretty penny, being able to get your hands on this many games for such a low price is cracking value.

Because it's unlikely to stay that price for too long, I'd recommend grabbing it sooner rather than later if you don't want to miss out. It's already crept back up in price a few pennies, for example.

For more bargains, be sure to check out these Xbox Live deals and our guide to the best Xbox One accessories. If you're in the UK, this is a great time to check out the latest cheap broadband deals for an upgrade, then you can download games even faster and enjoy 4K movie streaming too.